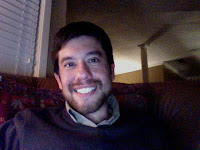 Thanks for having me here at Romance Reviews. Before we begin, I wanted to let everyone know that as part of the blog tour, I’m holding a contest. All you have to do is leave a comment with your email to this post, and your name is entered to win a free electronic copy of 3. If a reader happens to follow all my blog stops, then she or he can leave a comment at the other sites as well. This means that someone could enter 7 times for a chance to win the book. At the end of the tour, a winner will be chosen and announced.
Link to Blog Tour stops

3 is a contemporary m/m/m romance. It tells the story of three men, Justin, Spencer, and Dutch, whose lives have become inexorably linked.
Justin Jimenez is a flawed man. He is proud and stubborn, but his heart is so big that when he falls in love, he falls hard just as he did with Spencer ten years ago. Justin feels as if the universe magically brought them together, which is why he is so devastated when he and Spencer separate after a year of romantic upheaval.
Guarded and cautious, Spencer Harrison has never found it easy to let down his guard enough to be able to fall in love. When Justin obliterates his defenses with no more than a kiss upon their first meeting, he is surprised. What shocks him even more is when he and Justin almost break up. Spencer is so devastated he flees to England for four months to escape the pain of heartbreak.
Dutch Keller charges through life with both barrels, rarely weighing the consequences of his actions. If it feels right, then he does it. Still, meeting and falling in love with Justin while Spencer is abroad terrifies Dutch. He is uncertain if Justin’s love for him will prove stronger than the feelings Justin has for Spencer. Dutch also fears the secret that he and Spencer share, and he wonders what his hidden relationship with Spencer might do to his relationship with Justin.

When Spencer learns of Justin and Dutch’s affair, the first of their many secrets are exposed. The three men must untangle the web of lies and betrayals in order to find the events in their lives that led them to friendship, passion, and betrayal. If they don’t, they might never see the love at the heart of their shared pain.

I learned that I had a bias I didn’t even know I had. 3 deals with a complex relationship dynamic that is unusual but not as uncommon as one might think. I had this picture in my mind of how a relationship should be, but I learned that my definitions don’t fit everyone, and they shouldn’t. We are all who we are, and that was a good lesson to learn.

3.  What authors or friends influenced you in helping you become a writer?

Stephen King influenced my desire to become a writer. I had always enjoyed reading, but when I read It, suddenly all these stories started running through my head, and I just had to write them down. I was a child, so they weren’t very good, but his books fanned the flames of my creativity. After King, I knew writing was what I wanted to do.

4.  Besides writing, what other interests do you have?

Vacationing! I enjoy getting away and leaving the responsibilities of the world behind. My days are pretty full and hectic. When we go away as a family or when my husband and I go away by ourselves, that’s when I recharge my batteries from the hectic life I lead.

5.  Can you tell us about what’s coming up in the next year for you writing wise?

I recently submitted a paranormal romance to my publisher. It’s a story about a man and his guardian angel, but I’ve put a Stephen King-esque twist to the complications on the path to love. Besides being a fan of King, I’m a fan or horror and romance, so when I came up with this idea, I saw the opportunity to merge the two genres together. I had great fun writing it, and my husband and beta reader enjoyed the mixture of romance with horror, so I’m hoping the publisher does too. Keep your fingers crossed.

Though Matt sees himself as an ordinary man loved by the family who adopted him, he is unaware that he is the Gifted One. His unknown blood lineage makes him a seventh son of a seventh son. Within him rests the unlocked potential of a positive force for good. His promise as the Gifted One grants him special favors from heaven in the form of his own personal savior, the Archangel Gabriel, but it also marks Matt for death from the wicked, who attempt to kill him every year on his birthday.

Being the Gifted One and dodging demonic attacks aren’t Matt’s only problems. He has fallen in love with the Archangel Gabriel, who was sent by heaven to protect him. Gabriel returns Matt’s love, defying divine law and placing them both in danger from demons and angels alike. Heaven fears that Matt and Gabriel’s union will result in an evil similar to that of a fallen band of angels called The Watchers.

Can Matt survive the rising ancient evils that have hounded him since birth? Will heaven allow Matt and Gabriel’s love to exist? Or will both heaven and hell turn being the Gifted One into a curse?

[Note: Per Jacob, this has now been accepted by Dreamspinner Press and is titled The Gifted One. ]

I also just finished a short story about a man in his fifties, who is trying to piece his life together after being shoved out of the closet by his vindictive ex-wife. He wants to move on, but as the town pariah, he finds it difficult to get past his mistakes at least until he becomes reacquainted with his son’s childhood best friend. I’m hoping to get this short story into an anthology titled Snow on the Roof.

6.  How can readers connect with you online?

They can find me at any or all of the links below.


Jacob Z. Flores lives a double life. During the day, he is a respected college English professor and mid-level administrator. At night and during his summer vacation, he loosens the tie and tosses aside the trendy sports coat to write man on man fiction, where the hard ass assessor of freshmen level composition turns his attention to the firm posteriors and other rigid appendages of the characters in his fictional world.

Summers in Provincetown, Massachusetts, provide Jacob with inspiration for his fiction. The abundance of barely clothed man flesh and daily debauchery stimulates his personal muse. When he isn’t stroking the keyboard, Jacob spends time with his husband, Bruce, their three children, and two dogs, who represent a bright blue blip in an otherwise predominantly red swath in south Texas.

You can follow Jacob’s musings on his blog at http://jacobzflores.com or become a part of his social media network by visiting http://www.facebook.com/jacob.flores2, http://twitter.com/#!/JacobZFlores, or http://www.goodreads.com/author/show/5142501.Jacob_Z_Flores.

Great interview! I have a weakness for m/m involving angels, so THE GIFTED ONE will be a treat, too. Best of luck with 3!

Thanks for stopping by, Vita! :)

Jacob. I read your excerpt to 3 and was floored. Your writing is simply fantastic! Looking forward to reading more!

Loved the 3 excerpt,. The cover is great. I cat wait to read The Gifted One, since I love paranormals. Thanks!

Enjoyed the post!
and eek! YAY!! I'm so happy 'The Gifted One' was accept by DSP. I look forward to it! \o/

Thanks, Judi! I was so excited as well. I learned it was accepted at GRL, and I was jumping up and down on the hotel bed. LOL