THE CHRISTMAS CATCH by Ginny Baird 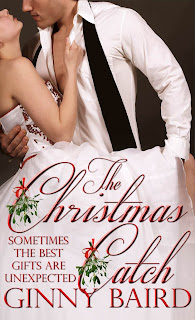 Note: this is a PRINT book, though you can buy digital copies

Since the death of her military husband two years ago, single mom Christine White has struggled to get by. By throwing herself into her work as a Chicago copywriter, she’s managed to keep food on the table but has gradually lost sight of what really matters, like building a bond with her four-year-old son. When Christine’s best friend insists she spend Christmas in Vermont so she can get her life in order, Christine initially resists. Little does she know she’s in for a memorable holiday that will reignite her faith and reawaken her heart.

Bachelor professor John Steadman has given up on finding the right one. Spending time with his friends while keeping up with his job seems satisfying enough. Then one day close to Christmas, a beautiful woman from Chicago nearly runs him off the road during a snowstorm. What’s more, she’s got a kid in her car. It’s only natural that John and his trusty golden retriever want to help drag them out of a ditch and steer them toward their destination. What John doesn’t expect is that soon he’ll be hoping Christine and her son will be staying in Vermont – for more than just a little while.﻿

What are you looking forward to this Christmas holiday?

Post your response and be entered in a chance to win a copy of The Christmas Catch
at November 25, 2012

Looking forward to spending time with my 4 yr old granddaughter and my 92 yr old mom.

Looking forward to the decorations

Spending time with family and friends that I don't get to see nearly enough throughout the year! And all the good food!!)

I am looking forward to seeing my family.

I am looking forward to seeing my family here at my house and at my oldest brother's house..

Enjoying time with my children!! All four of my children and their families will be coming home for Christmas. We haven't been together since April 9th, 2011 when my oldest son was married. My 1 year old granddaughter and my 88 year old mother will also be here!!

I'm looking forward to all the holiday movies and TV specials. I could watch them all year long.

Down time to hang out with the family!

Spending time with family. Sounds like a great book.