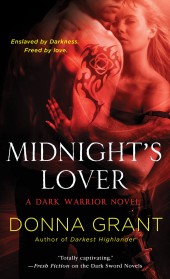 Defenders against evil. Bound by the gods. The Dark Warriors are taking their battle from ancient Scotland to the modern world—where a woman’s love can set them free…

A WARRIOR’S PASSION
Driven by the fierce god within him, Highlander Ian Kerr is sworn to fight for the land he loves—and the brother he lost. But when he’s magically transported four centuries into the future, he finds himself fighting his own desires—for a beautiful, bewitching woman who could hold a warrior spellbound…
A WOMAN’S MAGIC
Danielle Buchanan has heard the legends. She has felt the power of Druid blood in her veins. But she has never known a man as fearsome—or as haunted—as the warrior Ian. With her magic, Dani must help him battle an ancient evil. With her heart, she must join him in his quest. But only with her soul can she free him from his curse…and seal their fates together.

-----
Okay, I am going to be easy on you this week. No questions. No hard stuff. Just post if you're interested in this book and I'll put your name in the hat for this book.
at November 11, 2012

I would love to win this book... Great contest..

I would love to win it!

Definitely interested here! I read and enjoyed the first book and I've been looking forward to this one.

I'm interested, put my name in the hat please!