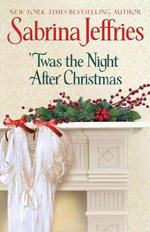 As an asthmatic and sensitive child, Pierce Waverly, the present Earl of Devonmont, could never please his father. He was sent to school at eight to “toughen him up” and wasn't to see his parents or his home for thirteen years. Though he longed for his mother, he spent all school holidays, even Christmas, with Waverly relatives on their farm. When Pierce was twenty-one, he ventured home. He hadn't expected to be welcomed by his father, nor wanted to be, but he was again disappointed by his mother. Upon inheriting the title and estates on his father's unlamented death, Pierce continued his hedonistic life in London, had his mother moved from the manor to the dower house and managed to avoid her when visiting the estate. This continued for ten more years. Though he has a reputation as a care-for-naught high liver who often makes the gossip sheets, he's a generous landlord and does his duty by his mother; just six months ago he had his manager hire a companion for her. Christmas is coming, and Pierce plans to spend it at Waverly Farm as usual.

Mrs. Camilla Stuart feels very fortunate to be working for the kindly Lady Devonmont. Camilla was raised in an orphanage, married a vicar, had a son six years ago and was soon widowed and left destitute. But when Lady Devonmont learned of her son, she urged Camilla to bring him from the relative's where he was staying. Daniel's presence is kept secret from the estate manager—he had told her when hiring her that his lordship doesn't like children. Camilla knows of the estrangement between her employer and the earl, and her heart goes out to the dear lady in this holiday season. Surely Devonmont is not so hard-hearted that she can't convince him to visit. Her letter urging him to come see his mother rather strongly exaggerates some vague health complaints.

Perhaps for the sake of his first eight happy years with his mother or the feelings of ennui descending on him lately, Pierce packs up and goes home to arrive unexpectedly. Things are not as he was led to believe, but the attractive companion's spirited defense of his mother causes him to stay, hoping she will make it worth his while.

Pierce is not as bad as his reputation. As Camilla begins to sense this she wonders at the reasons for the estrangement between mother and son and how she can heal the breach. Wonderful dialogue and character interaction mark ‘TWAS THE NIGHT AFTER CHRISTMAS as an especially affecting work. Little Daniel will charm you, and Pierce, Camilla, and even the countess will tug at your heart in this well-written book. You know there will be a happy ending; this is a holiday book, after all. Still, it may keep you up all night. It easily merits one of RRT's rare Perfect 10 awards.

I just finished her Hellions of Halstead Hall series!

I have this book on my tbr list... I love Sabrina's books.