Katie Porter on... Karaoke in Romance? 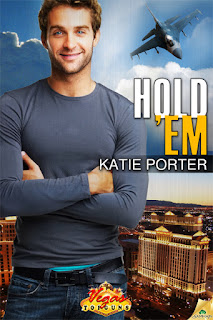 Sure we could’ve demonstrated many of the same relationships and included similar trash-talk by situation our characters at a regular bar. But…it’s karaoke! One’s selection of song says a lot about a person. So does what they don’t select.

For example, Ryan Haverty from the series opener, DOUBLE DOWN, is a terrible, terrible singer. He likes Springsteen and does his best to do harm to everyone’s ear drums. It says he’s an all-American guy who’s also a good sport and a man who’s not afraid of laughing at his failings. He has plenty of other things to be proud of.

Heather Morris, the enigmatic heroine of INSIDE BET, croons to Billie Holiday. We’re talking old school cinema cool. She exists in her own world while smoothing out the silky notes of a heartbreaking ballad—melancholy without going overboard. Her boyfriend, fighter pilot Jon Carlisle, however, is a show off to end all show offs. He doesn’t choose his own tunes. He dares his buddies to pick one for him—which requires serious balls. Jon would take that as a compliment.

Leah, from our latest release, HOLD ’EM, is an angry little thing. The hero, Mike, once thinks of her as a demonic ballerina. She’s petite but can fly F-16s better than anyone in her squadron. That she belts out “I’m Only Happy When It Rains” by Garbage and “She Hates Me” by Puddle of Mudd gives a small indication of her personality. She’s a ticking time bomb of energy that needs some outlet.

Which leads us to Mike… Who doesn’t sing at all. He isn’t particularly interested when he has Leah to watch. And then, well, it’s hard to sing karaoke when making out in naughty places…

“Meet me in the bathroom,” Leah said. “Women’s. Ten minutes.”
“Done.”
She slipped away from the table, making sure to stop by to talk to some women she knew from another unit. They were out for a girls’ night, and Leah had to deliver the bad news that yes, Ryan and Jon were both off the market. The questions about Mike were much less deftly handled. She didn’t have any claim on him, but she couldn’t seem to lie and say he was involved with anyone else.
Instead she popped smoke and headed for the bathroom, nerves making her hands shake the whole way.
Thank God the tiny room was clean. White-tile walls gleamed. Even better, it was private and had a single locking door. Since the night was relatively young, she hoped they wouldn’t be interrupted.
Leah managed to keep her guts together until the knock on the door. Then her heartbeat amped to fuck-all overdrive. Zooming. She plastered a smile on her face, in case it wasn’t Mike, and opened the door.
It was him all right. The hot, dark light in his eyes completely belied his casual grin. “You rang?”
She grabbed his T-shirt. Yanked. Hard. He staggered into the bathroom. She slammed the door shut and flipped the lock.

Some things are more important than showing off on stage. Sometimes it’s more about showing off in private…no matter where that “private” takes place!

Up next for Katie Porter, the co-writing team of Carrie Lofty and Lorelie Brown:

Now that the first three of the RT BookReviews 4½ Star Top Pick “Vegas Top Guns” series have been released, readers can anticipate the final two installments, HARD WAY  and BARE KNUCKLE, in 2013.

We'd like to give away a copy of DOUBLE DOWN, INSIDE BET or HOLD ’EM (winner's choice) in any format. Just answer: What karaoke song have you sung, and were there dares/alcohol involved? If you haven’t…what’s holding you back?

Thanks again to Romance Reviews Today for featuring Katie Porter and Hold ’Em!
at October 24, 2012

We had so much fun! We also sang Sugar On My Tongue by Ludacris and a few others I can't remember right now

I Will Survive. No alcohol was involved :)

I haven't sang karaoke in public setting although I have sang Christmas carols with my friends and my parents used to have a karaoke machine at home. Does that count? No alcohol was involved at any point.

Don't see karaoke. Prefer to watch other people sing it.

I loved to sing Karaoke. But my voice is not great anymore.. too many bouts of broncitis...

No way am I singing Karaoke! I couldn't carry a tune in a bucket, tho I do sing along with the radio when no one is listening!!!

Thanks so everyone who's stopped by, and to RRT for hosting us. This is the last stop on our tour for HOLD 'EM, which just received a 4 1/2 Star Top Pick from RT BookReviews. We're so thrilled, and even more thrilled by readers' continued enthusiasm about this book and "Vegas Top Guns" as a series.

As for me and karaoke, I'm much more comfortable with it than I used to be. Too much of a show off! But my first time was with a live band--a totally different experience than the "machine" karaoke I'd experience later. There's nothing like standing in front of a mic with a band at your back to make you feel like a rockstar in front of 200 people.

I sang "Never Tear Us Apart" by INXS. Can't remember non-rollercoaster levels of nerves like that. Anyone who sang got a drink on the house, so I bowed, exited stage right, and slammed back a G&T. Such a cool night.

Best of luck with the drawing!

What karaoke song have you sung, and were there dares/alcohol involved? If you haven’t…what’s holding you back?

I sing Brandy by Looking Glass. No drinking is involved I just have to look away from the people to sing.