A Perfect 10....and blog tour stop with Lori Foster! 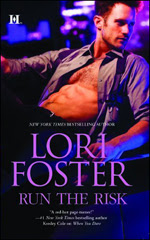 Detective Logan Riske has gone undercover to track down a lead in the investigation of the murder of his best friend by a local club owner. Logan has zeroed in on Pepper Yates, or as she calls herself now, Sue Meeks, as someone who might lead him to a prime witness, by moving in next door to her. “Sue” is plain, shy and unassuming, but there is something about her that stirs his senses more than the fact that she is his target. He needs to get close to her so he can learn if she knows where her brother, Rowdy Yates, is hiding. Rowdy reportedly knows something about the murder, and the police are looking for him. Logan forces himself into Sue/Pepper's closely guarded life by charming her and kissing her. The resulting explosive passion between them soon has them making love, but on her terms. She wants it quick and with only the minimal amount of her clothing removed, and it drives Logan crazy. What is she hiding underneath her clothes? Meanwhile, Logan soon learns that Rowdy is indeed in contact with Pepper and even has her under surveillance. Now, if only Logan can catch the elusive man.

Pepper is loyal to her brother and will do anything to keep him safe. This has meant changing her appearance and living a life as a shy, plain Jane in a rundown apartment complex. The arrival—and attention—of new neighbor Logan has Pepper confused. Why is he attracted to her even as she makes it clear she doesn't want to get involved with him? Yet Logan's kisses rock her world and makes her forget all the pain and misfortune she and Rowdy have suffered. Logan makes Pepper feel special—and loved. How will she react when she discovers that Logan is using her to get to her brother? And will she get in the way of Logan's quest to uncover the truth about his friend's murder?

Pepper and Rowdy had a rough, tough life growing up, with the one positive constant being each other. Each will do anything for the other. Rowdy is on the run, and he's endangering his life by keeping tabs on his little sister. When Logan moves in next door and immediately starts making his presence known to Pepper, Rowdy's radar is on alert. Her brother warns her about Logan, yet she can't resist the pull of sexual desire that radiates between them. Dressed shabbily and acting shy shouldn't attract a man, but Logan can barely keep his hands off her. Should she trust him?

The start of a new series ( Love Undercover ) from fan favorite Lori Foster, RUN THE RISK has a couple who will do anything to protect the ones they care for, including going undercover. Logan wants to bring down the club owner who called the hit on his friend, and Rowdy Yates is the one with the info who could make it happen. But Rowdy has eluded authorities and also the club owner who wants him shut up permanently. Discovering Rowdy's sister is a break in the search, but approaching her is going to be tough, so Logan decides the seductive approach is the best method. He knows that very few women can resist his charms, and soon he has Sue/Pepper reeled in…except she's bent on making sure their sexual flings are on her terms. She confounds Logan as much as he's intrigued by her. But the bait works as he flushes out Rowdy and enrages Pepper. How can Logan make it up to the woman he now doesn't want to give up? Can he solve the murder and win Pepper?

RUN THE RISK is an exciting tale with enough twists and turns—and romance—to please a romance reader. Logan, along with his friend Reese and his brother Dash, add plenty of testosterone and hunk worthiness. Pepper couldn't be in better hands than with Logan, despite her independent streak and her steadfast loyalty to her brother over everything else. While Logan meets the meek Sue first, the scorching chemistry between them rocks right off the pages in RUN THE RISK, which even confuses him by his sexual reaction. The search for Rowdy is Logan's main objective, but Pepper turns his head. Will he allow his attraction for her to distract him in his investigation? A stellar read that is pure fun from beginning to end, RUN THE RISK is a great start to the Love Undercover series and deserves a Perfect 10 for its just right blend of romance and suspense.

His fault in part, because he always had so much skin on display; she wasn’t used to  anyone like him, anyone who looked as good as he did.
A touch to her chin brought up her face and nearly stopped her heart. “Saying hi to a neighbor somehow intrudes on your privacy?”
No, no, no. He couldn’t touch her. She couldn’t let him touch her.

Follow this link for the next part of the blog tour and more information.

Be sure to check out the video below!

Sounds awesome. Thanks for the giveaway.

This book sounds fantastic. Can't wait to read it. I love Lori's books. Thanks for the blog tour stop and giveaway.

I love Lori's books. Count me in. Thanks for the contest.

Love Lori's books! Can't wait to read this one!

I love Lori's books and thanks for a chance to win her latest!

Can't wait to get my hands on this book.... love Lori's books.

I love reading Lori's books. I can't wait to start her new series.

Thanks for the giveaway. I love romantic suspense.

Sounds like another great book by Lori. I love her books and read the over and over.
sstrode at scrtc dot com

Yippee! A new book by Lori Foster to read. I'm looking forward to the new series.

Can't say I like the name Pepper. The storyline sounds very exciting! I've gotten away from her books.Looks like it might be time to check her books out again.

Thanks for the info on Lori's new series. Would love to win a copy.
gmapeony@yahoo.com

This looks like a good read.
Thanks for the giveaway.
marlenebreakfield(at)yahoo(dot)com