Q & A with Sharon Clare! 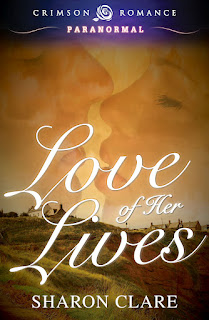 First, I want to say thank you so very kindly for inviting me to Romance Reviews today. Love of Her Lives is a whimsical romance based on the premise that we live many lives striving to attain true love. Calum and Beth are soul mates who have lived past lives together until Beth decides to live a life on her own. Left behind in the Upper World, Calum sees a wrongful imprisonment in her future, so he bargains with Finn, an elven trickster to return to Earth, rescue Beth and reclaim her heart. Unfamiliar with the twenty-first century, he must determine who plots against Beth while playing Finn’s passion-provoking game.

Beth has no recollection of their lives together and didn’t ask this sexually-charged stranger to come to her aid. She is horrified to find her house ransacked and her life threatened. With a secret to keep, she takes the greatest risk of all—trusting Calum. Her life soon depends upon re-evaluating everything she thought normal. Their eternal bond will only be saved if Beth can rescue the man who spanned worlds to rescue her.

I had such fun writing scenes with Calum who’s out of his element in the 21st century and a bit of a throwback to times where ‘errant’ women went over a man’s shoulder if they didn’t behave. Beth is in danger, but she has no reason to trust him, so he intends to spark her deep-seated memories of the passion between them. Safe in a hotel room, but unfamiliar with modern customs, like credit cards, elevators, coffee makes and telephones, and frustrated by Beth’s indifference, he is pushed beyond his tolerance when Finn (the elf) intrudes. Calum must hide all signs of the mischievous elf from Beth and since Finn loves to play games, Calum has a terrible time controlling his temper and behaving like a modern man.

Since I wrote about past lives, I went for past life regression and  life-between lives hypnosis sessions. I did it for fun and didn’t expect anything profound to happen, but that’s a whole other blog article. To sum up, I came away from the experience with a very strong sense of how to create my Upper World, the place where souls dwell between lives, and how that world interacts with us here. Finn’s world is a another whole other story.

I would say Diana Gabaldon and Karen Marie Moning. I love all things Scottish. I fell in love with Diana Gabaldon’s hero, Jamie Fraser and wanted to create an old world Scottish hero at least as stubborn as Jamie. Calum and Beth start out the novel in a past life in Scotland that doesn’t end so well.
I love Karen Marie Moning’s strong, hot, alpha, temperamental heroes. I love the pairing of old world heroes with strong, contemporary heroines that don’t easily succumb to these men’s charms. I also love the way the Fae play a role in many of her stories, hence I created the Alfar—ancient elves who have evolved powers beyond human capabilities. Finn has a theory to prove and plays games with humans to gather data to substantiate this theory.

My family is very excited. My daughters took my postcards for Love of Her Lives to work and have touted the book on Facebook. My son recommends it to his friend’s moms. They are very sweet. I dedicated this novel to my daughter Megan for her love of magic in stories and because she always had the ability to suspend her disbelief.

I love to travel and have dreams of writing retreats in castles and on beaches and in jungles and on mountain tops. I’m also an avid gardener. I love creating outdoor plant bouquets, so to speak, arranging perennials together based on texture, height, leaf and flower, although recently I realized I do this more in my head now than in actual action. I also love to cook and entertain, but  I am the most happy hiking in the woods by a river.

7. Can you tell us about what’s coming up next for you writing wise?

Yes! I’m excited to announce that I just signed a contract with Crimson Romance for a paranormal novella, Rhapsody. The heat level is a little hotter than Love of Her Lives. This is what it’s about:
Isabelle plans to escape the real world when she takes a tropical vacation to work on her relationship recovery program. But escape becomes too real when she realizes Paradise Resort has disappeared. She is trapped in an immortal world where she must win her freedom by seducing her opponent, a task she vowed against, in a board game of seduction. Her resistance is solid, safe, and steadfast until her traitorous body decides this is a game she wants to play.

Jonathan has made seducing women an art form. His needs are simple: breakdown Isabelle’s resistance, seduce the panties off her, and get back to the real world fast where an emergency needs his attention. He plays to win, but when Isabelle takes a penalty and they must play out her secret fantasy, Jonathan struggles to follow the objective and keep his own arousal under control.


8. How can readers connect with you online?

Thank you for asking. Readers can find me at sharonclare.com

Here’s a short excerpt in Calum’s point of view from Love of Her Lives:

“So, Tarzan.” Beth’s chest rose and fell in quick successions. “Are you going to pound your chest now, affirm your dominance?”
He had her pinned against the wee car in the garage, her back against the front door, his hands pressed to the window on either side of her.
He left the humor out of his smile. She knew him better than she thought. “I’m giving you a choice now. You can either drive the car to a nice inn, when I say it’s far enough away, or you can ride in the trunk.”
The storm clouds in her eyes darkened. She attempted to back away from him, but there was nowhere to go. Leaning in closer, he drew a breath of her, fully intending to intimidate her with his size. She needed to relinquish her irrational need to resist him.
“I am definitely enrolling in karate classes.” His Bethia craned her neck as far from him as she could manage. “Stop breathing on me. Why do you think I’ll be in trouble if I go to the police?”

Sharon Clare lives in Mississauga with her husband and three wonderful grown-up kids who come and go from the nest. Her favourite place to write is outside under the maple trees beside the trickling pond and the blooming lilies.

Love of Her Lives is a delicious read on so many levels. Sharon, I can not wait for the release of Rhapsody, though I can't imagine the heat getting any steamier than in LOHL!

In the meantime, putting Karen Marie Moning on my TBR list.

Thank you, Sherry! I hope you enjoy Karen Marie Moning's books as much :)

I must apologize to my husband for not mentioning how wonderful he's been in supporting this book. He tells everyone about my book and hands postcards out to neighbours and friends which is very sweet. I couldn't do this without him.

I finished reading Love of Her Lives last week and was seriously wowed by Sharon's engaging storytelling. Just the right amount of romance, passion and fun, along with a deft hand for drawing the reader in. If you haven't read it, I strongly suggest you head to Amazon and download it.

That said, good luck with the release, Sharon!

Thank you so very kindly, Terri! I'm glad you enjoyed it. And thank you for mentioning it was fun. That's exactly what I wanted to write. A fun, feel-good story.

Congrats on the book! Nice excerpt.

Great interview and excerpt! And congrats, Sharon, on the new novella. More fun to come...
;)

Whew, Sharon! Book two sounds hot, hot, hot. Congrats on the new contract. I am so proud of you. Your hard work is paying off in contracts. Yay!

Thank you, Liv & Elaine, Rhapsody is a fun story and yes, Elaine, I turned up the heat a bit, but most of all did want to keep it light and fun!

Congrats on the new novella, Sharon! You always give such great interviews. :)