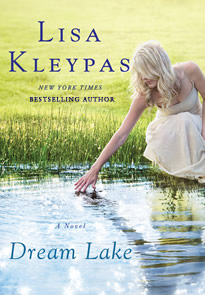 Win a copy of DREAM LAKE by Lisa Kleypas

Here is the review from Romance Reviews Today:

DREAM LAKE has an unusual and most interesting centerpiece. He's a ghost. He doesn't know who he is; the fragments of memory he has only tantalize him. He exists in an old, rundown Victorian house that he can't leave. When people arrive and a debate ensues as to whether it's better to fix up the house or tear it down, our ghost wonders if he will disappear altogether if it's demolished. Thankfully, Sam Nolan decides to save the old place. The ghost is glad to have people around. Besides the entertainment, he hopes he may learn something from them about himself. Gradually he realizes that Sam's brother can see and hear him.

Alex Nolan is a builder and a master carpenter who helps his brother renovate the house. He's also a bitter man. As the youngest member of his family, he was most affected by his parents' descent into alcoholism and death. Alex is a cool—most would say cold—and rigid character who accepts the presence of a ghost with little more than irritation. He's the only one who can see and hear it. The man and the spirit form a relationship of sorts.

Zoë Hoffman runs a bed and breakfast with her cousin and friend, Justine, where she indulges herself in her love of cooking and their guests in savory meals to start their days. Unhappily, Emma Hoffman, Zoë's beloved grandmother who raised her, is declining into dementia and will need care for what remains of her life. Emma owns a small house nearby that she and Zoë can move into once it's made ready. It needs a lot of fixing up, so Zoë hires Sam's brother, whom she hasn't met, to do the work. The initial meeting doesn't go well on a personal level. Alex is his usual abrupt and surly self when he meets the beautiful and sweet Zoë, but they come to a workable arrangement.

Both Zoë and Alex are divorced, though the circumstances were far different. Zoë lost a best friend when her husband left and she's been alone since then. To Alex, it was just one more piece of proof that love and good marriages are myths. As life goes on for them both, they meet life in their own ways. As for our ghost, he can now leave the Victorian, but he's somehow become attached to Alex. Whither Alex goes, so goes our ghost.

Does the ghost ever learn who he is and why he's where he is? We know from the beginning that Alex needs renovation as much as the old house. Will he go the way of his parents? While change must begin from within, Zoë's feeding him up doesn't hurt at all; her food has a soothing effect. But is she in for a world of hurt?

The character development in DREAM LAKE is deep and complex, but the tale is laced with humor, generosity, and passion. Indulge yourself with this riveting story, and if you haven't already read its prequels, look up the rest of the series. It began with a short holiday novel, Christmas Eve at Friday Harbor , and continued with Rainshadow Road . I eagerly look forward to Crystal Cove in February.


You can learn more about DREAM LAKE by clicking  here.

I cannot wait to get my hands on this 3rd installment of Friday Harbor books.. Lisa can weave such great stories. I and I like the ghosts in these stories...

I love this series.

This book sounds lovely, I can't wait to read it! Thank you for the givaway.

Lisa Kleypas is one of my favorite authors. I really like her historicals and like her contemporary Travises series even more! I like her new series because it has a bit of magic and would love to read Dream Lake.

Sounds like a very interesting read. I did read Christmas Eve at Friday Harbor and liked it very much. And I have RS Road on my tbr.

Loved the first book in the series.

Thanks for the great recommendation! I love romance novels (I'm typically a Nicholas Sparks girl) and I’ve been looking for a few new books to add to my “must read” list, I’ll have to pick this one up! I just finished a great book called “Tell Me When It Hurts” by Christine M. Whitehead. You can get check her out and get the book right off of her website, http://www.christinewhitehead.com. Thanks again for the post!

How fun! Thanks for the giveaway--Ms. Kleypas is fantastic!

I love Lisa's books! I'd love to be entered to win this one.

'thanks for the chance

I would love to be entered, thanks for the giveaway!

I haven't read any books featuring a ghost...interesting!!

I do love her Lakeshore Chronicles series!

This book sounds fantastic. Can't wait to read it. Thanks for the giveaway.

That was a well set up review.
I am definitely looking up this whole series.

Also, thank you, for the giveaway.
E-mail-bookandmoviedimensionblogger[at]yahoo[dot]com