Women Did It Better! By Carrie Lofty

Joe from His Very Own Girl is an incredible hero, but I also have an amazing fondness for his lady love, Lulu Davies, a British civilian pilot. The war took an atrocious toll on populations around the world. That much is well documented and horrible. The reverberating change that came about as a result of mobilization, however, were the advancements made by women in many fields. 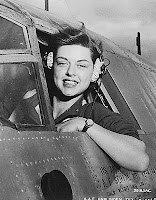 One such field was aviation. Jackie Cochran was a daredevil celebrity who helped found the Women Airforce Service Pilots (WASPs) in the United States. By allowing civilians to move planes between hangars, weapons fitting, and their ultimate destinations across the country, the WASP ideal was to free military men from the task. In truth, the WASPs were greatly for show.

British flyer Amy Johnson, however, achieved far more by helping to found the Air Transit Auxiliary. Its pilots ferried every type of plane, including four-engine bombers and the first jets. The ATA was almost entirely co-ed, and was the first British institution to offer equal pay to men and woman. Although Johnson died in a plane wreck over the Thames early in the war, her innovation meant unparalleled air efficiency in Allied Europe.

Of course, these female innovators weren’t always accepted. In His Very Own Girl, Lulu and Joe go more than a few rounds about her ambition and her place in a peacetime world. Joe is a traditional guy. It’s hard for him to accept that the woman he loves could out in a war-zone, as vulnerable as he is.

Capt. Piper leaned against the wall and crossed one boot over the other. He finished another swig of coffee, downing the foul stuff with the expression of a child being force-fed castor oil. “You got a letter, right? I’m curious where it was posted from. Have you looked?”
Joe took the envelope out of his tunic pocket. “St. Petersburg? Are you kidding me?” “That contact of mine in Aachen—he did a little digging on your girl. Turns out the ATA has authorized women to ferry aircraft in all Allied territories.”
“But Russia?”
“She’s been out of England for at least three weeks. What started out as a flight to Marseilles wound up taking her all over—St. Petersburg, Cyprus, Athens. Pilot logs even have her in Rhodesia. She flew some Commonwealth general down there for his mother’s funeral.”
Joe had to swallow past a lump of panic and an unexpected sense of admiration. “Where is she now?”
“Don’t know. Could be back to London. The hop down to Rhodesia was eight days ago.” The captain set his tin cup aside and produced two four-packs of cigarettes, the kind that came with every K-ration.
Curious and proud and full of dread, Joe tore open the envelope.

Dear Joe,
I can’t explain why I love flying, other than it sets me free. It makes me proud. And you’re right about respect, Joe, because I treasure the respect I’ve earned among my colleagues.
As for the traveling, I’m getting it out of my system. Then you’ll be stuck with me. Stay safe and I will too.
Love,
Your Lulu

Although most people recall images of Rosie the Riveter, working factory jobs left empty by men, but few know the true influence of daring, gifted women at the tops of so many varied fields. I love to think that Lulu, daring heroine extraordinaire, embodies that magical spirit. Good thing her guy Joe loves her too!

Summer has been a blast! Available now from Pocket Books are three Christ Family romances. FLAWLESS kicked it off with a tale of an estranged couple's search for love. The 99¢ tie-in novella, "A LITTLE MORE SCANDAL" follows two aspiring lovers to London. And the Scottish-set second novel, STARLIGHT, was an RT BookReviews 4½ Star Top Pick. "Richly nuanced characters and a superbly realized Victorian setting come together brilliantly." ~ The Chicago Tribune

Where to find me:

I'd like to give away a digital copy of HIS VERY OWN GIRL in any format. Just answer: What impressions of WWII women do you have? Do you recall stories of the era from women in your family?

Thanks again to Romance Reviews Today for featuring His Very Own Girl!
at August 31, 2012

My impressions of WWII women (and men) are very favorable. My Mom worked at a small city hospital along the Gulf of Mexico that treated victims of German U-Boats. Yes, Germany sent their subs into the Gulf and injured civilians. Toward the end of the war, Mom went to nursing school when the U.S. government provided scholarships because the country needed more nurses. Dad was a WWII hero; Mom was, too.

All I know about WWII women came from movies and books. In my own family, survival was the important thing during that time, making sure the children were fed and keeping everyone together.

Once of my favorite aviatror books is West with the Night by Beryl Markham who flew in the 1920s and 1930s.

Hi! I love hearing stories from the era, because they help make real the fiction that I based on research. Does that make sense? Books can only provide a little of the information that makes researching the era so special. Good luck with the giveaway!

I think they're brave and strong.

Both of my grandmother's who were around during WWII are dead now, but what I do remember about their stories of this time was they admired Presidents Franklin Roosevelt and Harry Truman. Both of my grandmothers worked as cleaning women and they were the first to introduce me to TV movies of the '40s so many of my impressions about women during WWII came from actresses like Jean Arthur, Olivia de Havilland, Ginger Rogers, Irene Dunne, and little Shirley Temple. They were fun loving women who had their own opinions and worked hard whether it was taking care of the home, the community, or going to work like my grandmothers. The '40s were a great time for women to exert their individuality, though WWII was going on and people were struggling.

Don't include me in this--just wanted to say how fantastic His Very Own Girl is! Our family had the chance to visit some WWII era ships not long ago, and this story really brings to life the people and places! Good luck, everyone!

Thanks so much, flchen1! I love hearing that!

As for everyone else, thanks so much for your stories. They all fascinate me. Have a great week!