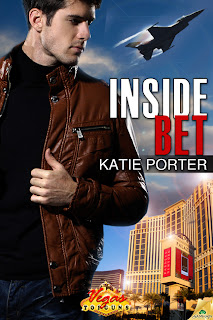 Our “Vegas Top Guns” series of contemporary erotic romances—I say “our” because Katie is actually the co-writing team of myself, Carrie Lofty, and my long-time friend and critique partner, Lorelie Brown—is based on the concept that fighter pilots are friggin’ hot. I’m gambling that lots and lots of readers are of our mindset, because the series in teeming full of them! There’s a hot major, a hot young prodigy, a kick-ass chick, a Zenned-out badboy, a joker, and an asshole, so basically a gamut of humanity represented in our cast. Beyond friendship and loyalty to their comrades, these diverse individuals have one thing in common: they’re adrenaline junkies.

Think back to the film Top Gun, which I’m hoping even younger readers will have heard of. It’s hard to tell with a movie that is, oh gracious, 26 years old. Basically, it was back when Tom Cruise wasn’t too crazy and Val Kilmer was a sex symbol. (If you had a crush on him at any point in your youth, don’t Google pictures of him now. He’s fully embraced middle age).

Anyway, there’s a scene in Top Gun where Tom Cruise is curled over his motorcycle, racing down a long stretch of road as he races a plane taking off. He’s yelling. He’s pumping his fist. He’s reveling in the speed. In fact, the most quotable line in the film is: “I feel the need…the need for speed!” Even the memorable two-on-two shirtless volleyball scene demonstrates that these men on competition. (There is an inevitable 1980s-based lack of women other than Kelly McGuiness, the brainy but mostly-just-love-interest.)

Adrenaline. The mental stimulant that triggers the fight-or-flight instinct—with fighter pilots, the “flight” is literal. If there is an average measurable level of adrenaline in the human population, “adrenaline junkie” actually start from a lower baseline. To them, real life is in slow motion and exists without a lack of significant stimulation. They love to take risks, to get to normal or even elevated levels of that adrenaline high.

And all fighter pilots have one-night stands that accidentally turn into happily-ever-after romances. That goes without saying, right?

We took cues from these ideas. I don’t know about Lorelie, but I watched Top Gun at least three times. “Danger Zone” was on my playlist. (The lyrics are quoted in one of the “Vegas Top Guns” books, but I can’t remember which.) These people aren’t your ordinary human beings. They have a lack of adrenaline that leads them to need a “fix” on a regular basis, which makes them seem superhuman. Perfect for romance leads! We love to read about men (and women) who manage amazing feats.

Enter Heather Morris, the heroine of Inside Bet [http://katieporterbooks.com/books/vegas-top-guns/inside-bet/]. She’s got a little bit of Charlie in her. Although she an accountant who drives a practical econo-car and obeys all speed limits—so very different from her love interest, the young genius fighter pilot, Jon Carlisle—Heather has a wild streak. Has a wild streak, actually. She put it away after a dangerous mistake at age eighteen that forced her on the straight and narrow.

But it was for the best that she took a chance on Jon. There is such a thing as being a functional adrenaline junkie. He flies fighter jets and gets off on novel, kinky dares, so he’s got that down pat. Inside Bet is about making sure Heather turns out strong enough to embrace her “need for speed” dark side and have a damn good time along the way.

Up next for Katie Porter:

We'd like to give away a copy of DOUBLE DOWN or INSIDE BET (winner's choice) in any format. Just answer the question: What was your favorite moment in Top Gun? Or if you haven’t seen it, do you have an adrenaline junkie in your life?

Thanks again to Romance Reviews Today for featuring Katie Porter and Inside Bet!
at August 28, 2012

Favorite moment When he flew upside down over the boogie and gave the guy the bird!

Loved also the scene in the bar/ restaurant when they sang the piano duet (goose and maverick).

Yes, and the trash-talk they give him on the first day when he and Goose tell the story of the MiG! I half think we write military romances just for the trash-talk *g*

Thanks for stopping by, Laurie!

My favorite moment was when Goose and Maverick were singing in the bar. Great moment!
This series sounds fantastic. Can't wait to read it. Thanks for the giveaway.

Have not seen Top Gun,and have no adrenaline junkie in my life

Love him and Goose singing in the bar.

I loved Top Gun! I read the description and warning for this book over the weekend when I was perusing upcoming Samhain releases and thought it sounded really good!

My favorite scene....the volleyball scene :) But that is coming from my teenage self who was embarrassed by the love scenes way back when. I haven't scene the movie in I don't know how many years, so my take on my fav scene might be a bit different now, LOL!

The bathroom flirting by Tom and Kelli, and the volleyball scene , Ty great prizes whoo, congrats on books and great reviews
Kimh

I loved the scene in the bar when the guys were singing 'Loving Feeling' to Kelli's character.

Great to see everyone stopping in! I love the cuteness of the "singing in the bar" scene, but I fast forward it because of the horrible singing *g*

I love Top Gun and my favorite moments are any moments that feature songs from the great 80s soundtrack, like Take My Breath Away and Danger Zone.

Congrats Carrie and Lorelie on your Vegas Top Guns series, the books sound fantastic! And the covers are smokin' hot! :)