Q & A with Lynette Endicott and Tami Dee!!! 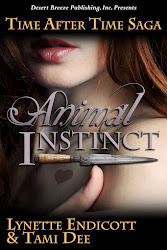 Lynette: The first to be published is Animal Instinct, set in the 1970s. Allison Green is a veterinarian and the descendent of a line of women who bear the Heartmark, a heart-shaped birthmark that identifies them as the target for Mildreth, an evil time-traveling enemy. Sean Barnett is the new detective in town. An evil from the past threatens to destroy the love developing between Allison and Sean

Tami: It is about two people meeting, falling in love, and while doing so having to survive not only Allison's ancestral memories, but coming to grips with the fact that she is a part of her family's amazing legend and legacy simply by bearing the Heartmark on her body. Sean and Alison must face, and conquer, a time traveling enemy who is determined to rob them of their new found love.

2. What made you decide to write together?

Great question – and like many blessings in life it just…happened.

Lynette: I’d had the idea of a series of generational books, where the heroine in each faces the same enemy in her own way. It was pretty nebulous at first. And Tami is one of the people I run ideas by. She was the only one excited about the concepts at first! And as the structure of the books unfolded we each contributed elements and had ideas for books, and so it became natural to write them together.

The whole experience has been on line! While we have met, very briefly, twice, most of our connection has been email. . (One meeting was to hand off a manuscript in the days before we emailed them, and the other was at the Pleasanton Scottish games where Tami was doing some research. I regret now that we didn’t take a photo together! But we have a photo shoot scheduled now as part of our book tour!) So each of us has taken the lead on half the books, and we have gone back and forth in email to tweak and fill out the family stories until we have something that I think is fun, exciting, interesting -- and we hope the readers will, too.

Tami: Lynette e mailed me with the outline, asked if I wanted to share this adventure with her, and I jumped at the chance. :-)

3. How long have each of you been writing?

Tami: Ummmm, about eight years now, I think. I have dyslexia, and regardless how hard I try and overcome it, I still have a hard time with certain things, like spelling. Lol, I can spell the same word wrong, eight different ways. Half the time my spell check is even stumped. But since I was a child books have always been my best friends and offered comfort. I have had stories shuffling around in my head forever, but each time I tried to put those stories to paper, the whole spelling thing proved to be so discouraging I would just give up. Then I realized in the world of published books, there were editors who could 'fix' my dyslexic oddities. So, once I decided to go for it, no matter what, I joined an on line critique loop, met Lynette and another very talented writer Carole, and each woman seemed to 'get' my writing, or what I was trying to write, and gradually I left the loop, but kept in touch with Lynette and Carole. I could have never become an author without them.

Lynette - more than a dozen stories and articles were published when I was between 14 and 22. After that I wrote mostly as part of my business world. I started writing romance books during my 20s - 30 or more years ago - but  might never have sent them to a publisher without Tami's encouragement.

4. You write as a team. How do you manage to coordinate who writes what?

Lynette: People have been asking me what it is like to work together on these books. It is very motivating to me. When I know Tami is waiting I get to the work a little faster, and when I am stuck on a plot point I have someone to talk to about it besides my husband, who while helpful doesn’t think like I do.
The most amazing thing about this journey is that we think so much alike! I can only think of one plot twist Tami suggested that I was unsure of (and I’ve come around on that one. Which we will keep as a surprise for our readers.) All the others have been absolutely right on with my vision, and I feel she's responded to my ideas in much the same way.
We didn’t alternate chapters, like some people assume. Each of us is taking the lead on three of the series of six that we’ve set out. We are finished with the first, Animal Instinct (AI), where I led and Tami contributed humor and sizzle; we are well along in the second, Survival Instinct (SI) where Tami led and have completed the first draft.  It is a GREAT book – I love the characters and the story but I also love how it included some of the characters from AI and brought in more of the elements from the other stories yet to come.
And working out those details with Tami has been great fun. I look forward to even more fun to come!

Tami says: I feel the same way. It was a bright day when we met, we make a great team and it is a pleasure to work with her on this Time After Time Saga! :-)

5. Do you have conflicts?

Lynette: There have been a couple - in the first draft there was some witchery going on, which Tami pointed out and we re-wrote. Tami had an idea for the relationship between the enemy and the first hero that I wasn't sure about - but I've come around. Because our values are similar we can work most things through.

Tami: The key with our coauthoring has been open and honest communication. We are committed to writing the best books we can, and we respect one another personally and professionally. Neither of us is thin skinned, and do not take it personally if one of our brilliant idea is vetoed by the other. Hahaha and, as Lynette said, having the same values is what allows us to write this series together without awkward moments.

6. What surprising things have you learned while writing?

We have learned how much alike we are!

Lynette: For a couple of people who met in an on-line critique group,  we have some odd things in common, including:
·No sons born into our immediate families – daughters only
·We both have cockatiels (a recent discovery). Mine just showed up on my back patio one day, starving but mostly healthy.
·We both have adopted calico cats – and except for the age difference they even look a lot alike.
·We both live in the Central valley in California (which we didn’t know when we “met” on line)
·We both enjoy writing romance, including some speculative elements (like time travel)
·We both have a moral aversion to paranormal elements in our books due to personal faith
·We like our books steamy but not explicit and want the sex within the bounds of marriage but recognize the sizzle of attraction in our characters
·We’ve each helped the other out in our writing journey
And now we can add – we are writing a series of books together!

Tami: What she said. (see, we really are in tune with one another)

7. What authors or friends have influenced you in helping you become a writer?

Lynette: My family has always been a great encouragement to me. My parents encouraged my imagination, reading and writing all of my life. My husband is a great editor for spelling (if he doesn't get too caught up in the story) and my daughter reads what I write, so I'm blessed with encouragement.

Tami: Family support is phenomenal. My husband makes me laugh, he loves to see my covers, tosses money at me when my desk top or lap top bite the dust so I can get a new one -- helps me brainstorm plot ideas--- but has never read a single book I've written, not even a blurb!! My daughter loves to read my books, but she refuses to read them before they are published because when she did read them early on, I would always end up changing up stuff so much, she would want to pull her hair out. hahah

8. Can you tell us about what is coming next for you?

Lynette: In addition to this series, the other two books in my Starting Over series will be out in the next year. Return of Joy will be released in October, 2012 and Finding Her Voice in July, 2013.

Tami: You have another Starting over book coming in July 2013??? Oh wow, that's GREAT!
For me, I am trying to write a screenplay. It is not easy and slow going. A very talented DB author, Gail Delaney, has allowed me to try and adapt her book, Revolution. It is an amazing Si-Fi, and when I read it years ago, I could so see it on the BIG screen.

Lynette: I didn't know that Revolution is the screen play you are working on! Oh, that is a favorite of mine. Gail's books would make a great series of Sci-Fi movies! How exciting!

(Oops - guess we just gave away that we really focus mostly on our collaboration and haven't caught up on all the other details! We will during our book tour and photo shoot I am sure.)

9. How can readers find more about your books and how to reach out to you online?

great interview, insightful for someone getting ready to co write, and funny.

Very enjoyable interview! Congrats on your new release Lynette and Tami! I love that the book is set in the 1970s.

Thanks so much, Tina and Paula P. We really are having a great time with this. We hope the readers will enjoy our efforts. :-)

Thanks for stopping by. Great to know you like the setting too!

Congrats on the book! Fun interview.