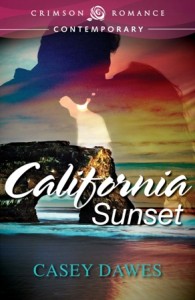 “How much of this book is true?” is a question authors frequently get.

CaliforniaSunset, my first contemporary romance novel, is totally true…but not all based on my own life, or anyone else’s life.

Writers are told to write what they know. We may be writing about an imagined world of aliens and monsters, but the emotional content of our stories is based on what we’ve experienced in real life or vicariously.

Annie, the heroine of California Sunset, is a divorced mother of a teenage boy. She works in the tech industry in Silicon Valley. As the book opens, she’s faced with a very difficult choice: uproot her life and her son and move across the country, or lose her job.

My degrees, including a Master’s from the University of Michigan, are in theater arts. How could I possibly write about the tech industry? Well, it so happens that I fell into the tech industry when they were hiring just about anyone and I stayed for over 25 years. Yes, I was laid off—twice in fact. By the time it happened the second time my two boys were old enough to be out of the house and I had remarried after a painful divorce and was living in California.

Annie tries to take what she thinks is the safe and secure route and stay with her company. But the world conspires against her and she struggles to remain on the course she’s set. She likes everything to be in control, but her world is spinning and ghosts from her past are making it impossible to think.

I think we’ve all hit points like this, times in our lives when there seems to be no way out of the crisis we’re in. And, of course, that’s always the moment when a good man walks into our lives—someone we don’t feel ready for at all.

In Annie’s case, it’s John. He’s recently moved to California from Montana after a long-distance engagement went sour. He’d like to see more of Annie, but has no interest in another cross-country relationship.

So I’ll leave it up to you—how much of California Sunset is true?  Have you ever read a book that seemed like something that happened to you?  Leave a comment about it to be entered into a drawing for a copy of California Sunset and one of the recently released books from my critique group: The Wanting Heart, Curse of the Wolf or Smitten Image. (These are e-books so you can live anywhere to win!)

“You have six weeks before the layoff is final.” He gathered papers into a folder. “In the meantime, look these over. Annie?” He held the papers out to her. “I really hope you change your mind.”
She took a deep breath, looked Randy in the eye and took the folder, feeling like the proverbial truck had just slammed into her. But she wouldn’t show it if she could help it.
So she threw back her shoulders and marched to her eight-by-eight office. Gently closing her office door behind her, she hurled her pad, pen, papers, and keys on her desk. Damn! She ran her hands through her curls. It would make her already frizzy hair stand out like Young Frankenstein’s, but she didn’t care.
Tears rolled down her face. She was tired of being the strong one, handling everything by herself. And now this. She’d worked at this company for eight years. How could they lay her off? Or worse, send her to godforsaken New Jersey?
She slid her laptop and Randy’s folder into her canvas bag and put on her “gently used” Burberry raincoat. Her head held high, low heels sounding a brisk staccato on the cement walkway, she strode out into the chill March air to the parking lot.
Her mind raced as she opened the door to her Prius. How could she move to New Jersey, leave behind her friends, and abandon the small beach bungalow that had been her sanctuary ever since the divorce? On the other hand, how could she give up a job that provided security and benefits for her child? David was going to go to college soon. Being laid off would destroy the nest egg she’d built for his college fund. Her ex wasn’t going to be any help. He could barely take care of himself. She slammed the door a little harder than she meant to do.

Leave a comment with your email address to be entered into a drawing for a copy of California Sunset and one of the recently released books from my critique group: The Wanting Heart, Curse of the Wolf or Smitten Image. (These are e-books so you can live anywhere to win!) 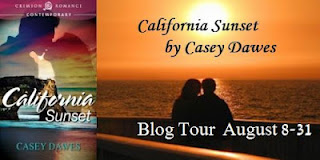 I've never read a book that seemed like something that happened to me. Nice excerpt.

Thanks for sharing the great excerpt Casey! It sounds like a really good read.

I haven't read a book that seemed like the contents happened to me, but did read one that I had always wanted to happen to me. I came close to that too, but, alas, it all fell through at the end! Great blog.

Love the cover and the excerpt too. Story sounds like a good one.

Thanks for all the good words! Sandy -- yep, sometimes it would be fun to be the heroine in the book and have everything turn out well. But as someone said, "Life happens while you're making other plans."

I hope you enjoy the book. I am working hard on the next one, California Wine.

I'VE NEVER READ THE BOOK BUT I'D GUESS 60 PER CENT?

Jamie Martin jamielovesweeping@gmail.com this sounds like a great read!

Jamie, thanks for the comment! My maiden name was Martin. Small world!