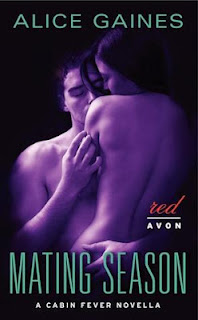 Setting and Premise in the Cabin Fever Series
People ask a lot about settings of stories.  What effect does the story’s location have on the tone?  Could the same story have happened in another place?  Setting varies in importance, of course.  Gone with the Wind could hardly have taken place outside of the Civil War southern United States.  On the other hand, many short contemporary romances could be moved to similar sized cities without affecting the story’s feel.
Settings matter in my Cabin Fever stories from Avon Impulse.  In fact, setting is important to the central premise of the series.  I wanted my characters together in isolated settings for several days so that they could feel free of the rules and restrictions that govern their normal lives.  That way, they could act on all their impulses with the conviction that “what happens here stays here.”  Of course, I also wanted the locations to be romantic and beautiful, places that are conducive to seduction.
The first story, Heat Rises, takes place in the middle of a mountain snow storm.  Ethan Gould and Laura Barber are snuggled together in a cabin with only one sleeping loft.  It’s the perfect place for Laura to act on the cravings she’s had for Ethan for over six years.  I hope I’ve captured the white-out they have to drive through to get to the cabin and the beauty of the snowscape the next morning.  Alone together, Ethan and Laura can knock down all her inhibitions like a line of dominoes.
The second story, Storm Bound, takes place on a tropical island as a mild hurricane bears down on it.  The luxury resort hasn’t opened yet, but the kitchen and wine cellars are well stocked.  Christie Lovejoy decides she’s not going to evacuate and neither are her two potential customers. Jon Carlson and Wolf Martin.  The resort was designed to withstand all but the most powerful storms, so when this one rages outside, the three lovers enjoy the sights and sounds as they enjoy each other’s bodies.  Later, after the hurricane is past, they go back to sun and sand and more exercises in pleasure.  I even gave the resort a state-of-the-art professional kitchen for the guys to cook in.  Can you say steak Diane?
The last story, Mating Season, is set in one of the most magnificent places on Earth…a redwood forest.  If you’ve ever strolled along under the huge trees, you know how magical this setting is.  In the deep shade, nothing can grow except for ferns.  You feel as if you’re in a cathedral.
Into this place, I send Professors Nolan Hersch and Gayle Richards, two animal researchers who’ve conducted a battle of wills in the journals and at conferences.  They were supposed to be part of a group of four, but the other two researchers have been kept from joining them by a washed-out road.  Nolan and Gayle are stuck together in a small cabin.  They’re stuck together in a small observation blind as they watch elk mating.  They’re stuck together inside the trunk of a hollow redwood.  That has to be the most unusual setting for a love scene that I’ve ever put into one of my stories.
I hope that in each story, I’ve created a world where inhibitions and self-denial have no place.  My characters are surrounded by beauty and have nowhere to go nor any way to get there for several days.  You’ll have to decide if I’ve been successful.

Alice Gaines
Learn more about Alice and her books at http://www.alicegaines.blogspot.com/

Post a comment to be entered in a drawing for an e-arc of MATING SEASON!
at August 17, 2012

I haven't read this series before but it sounds fantastic. Can't wait to check it out.

I have not read this author before, but I love the sound of her stories...

Oh I loved the first book, which you all must read! HEAT RISES! And it sure did in the book! I so would love to read MATING SEASON. I realize too that means I missed book 2! Love Cabin reads!

Looking forward to reading these.
Thanks for the giveaway
elaing8(at)netscape(dot)net

All I can say is WOW! This looks amazing!