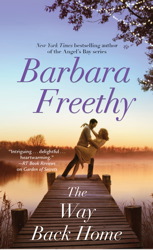 In Rob Hayden's last minutes alive, Gabe Ryder gave his best friend and fellow Marine a promise. Rob's family needs Gabe's help. After having spent a week with Rob and his family one Christmas, and sleeping with Rob's sister, Gabe knows that nothing can come of a closer relationship. His background prevents him from becoming the man Alicia needs and
deserves, but he will keep his promise to Rob.

Alicia helps her father run Hayden River Adventures on the Smokey River in northern California. After a disastrous accident on a raft trip last year, Alicia is not sure the business can survive. The fiancé of her best friend died on that trip, her father was seriously injured, she remains fearful of the river, and many of the citizenry of the nearby town of River Rock blame Alicia for the death, including her best friend, Kelly. They want the business closed down. It might be impossible to save the business, anyhow, but her father loves the river, and Alicia needs a job to help raise her son and put him through college. She became pregnant in high school and kept her son with her father's help. Justin is now best friends with David, whose father, Keith, is interested in Alicia. Gabe's surprise arrival is unwelcome. Why did he survive when her twin brother didn't? Why did Rob give Gabe his house? She can't believe he would leave a family home to an outsider, a house on the river next door to her father's, where she and Justin live. No matter how angry she is, she can't deny her attraction to the handsome former Marine, or the passion they shared for just one night. When inexplicable things start happening, though, she might be glad to have a Marine's support at home.

Author Barbara Freethy writes an excellent story in THE WAY BACK HOME. A reader can't help but empathize with Alicia, her predicament, and all she has lost. It takes a while for her to rebuild her determination, but can will power alone keep her family going? Many good characters inhabit the pages, including Alicia's former best friend whose woes thread through Alicia's trouble. The powerful emotion of grief causes a whole town to choose sides, and causes unforeseen danger. Good reading.