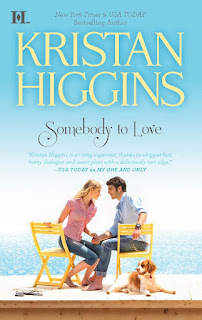 SOMEBODY TO LOVE is a story about discovering what you’ve really got going for you in life. Parker Welles, our heroine, is wealthy, has a precocious five-year-old son, has written a successful children’s book series…and then loses everything (except her kid). Dear old Dad gambles away her trust fund in an insider-trading scheme, and voila. Parker’s broke by the end of Chapter One. No money, no job…just a decrepit little shack on the coast of Maine that’s her only hope of a nest egg. When her dad’s lawyer, whom Parker calls Thing One, shows up on the scene, she’s forced to accept his help, even though she hates that she has to. But maybe James has more going for him than being a slick lawyer, and maybe losing everything was the best thing that ever happened to Parker.

2. Which comes first for you...characters or the plot? 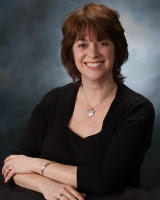 Most of my books start with a one line question: “What if you were…bankrupted/left at the altar/faking a boyfriend/in love with a priest?” Then I immediately go to the character. I want that character to have very good reason for being in the conundrum she’s in, and I want her entire life to be an explanation of why she’s been unable to find The One so far. I probably spend too much time thinking about the characters, but whatever works, right?

3. How long did you write before you got "the call?"

It took me about eighteen months to write and revise my first book; I had tiny little kids back then, so my writing time was very limited. I also realized it wouldn’t serve me to send a book out into the marketplace unless it was as good as I could possibly make it. I had always been a writer (PR and advertising), so it wasn’t like I was an electrical engineer who’d decided to take on a book. All my professional skills related to fiction writing, too, so I definitely had an advantage. Once I sent my book out to agents, it went pretty quickly, I’m happy to report.

4. Do you have any interesting writing quirks and if so, what are they?

No, not a one! Oh, wait, some are leaping to mind…I try to find a song for each book; once I do, it’s played hundreds of times. Like…800 times. I also write notes to myself in the manuscript: “I hate this character” or “Make this fun later.” Maybe all writers do that…I’m not sure. I need to have my dog with me. My colleague, if you will. She’s heard far too much, let me tell you, and she does nuzzle my feet when I sit at the keyboard, weeping…it’s good to have a friend!

5. What authors or friends influenced you in helping you become a writer?

Is it okay to say Margaret Mitchell? That’s because I didn’t appreciate the ending of Gone With the Wind until I was 42 years old (I’m 46 now). But when I was 14, I thought I could do much better, so I’d lay in bed and imagine something much more satisfying to the adolescent brain. I think that’s when I started to become a writer, though I didn’t actually try to write a book until my mid-thirties.
I had one friend in particular who helped me when I was getting my feet wet, and she’d send me notes saying, “When you’re a New York Times bestselling author…” and I’d smile, never imagining that it would really happen. When I did hit on that fabled list, she was the first person I told. Well, the second. My husband could tell by the scream and the subsequent weeping. I always cry when I’m happy.

6. Is there something (writing wise or personal) that you'd like to do?

Writing-wise, I’d love to write a very edgy murder mystery. Someday, I hope! Personally, I’d like to meet Derek Jeter, ride a horse on a beach, kiss Jeremy Renner and live in the Pacific Northwest (not all in the same day).

Very easily! I have a website, www.kristanhiggins.com  and a Facebook page, www.Facebook.com/KristanHigginsBooks. I answer all my email myself, too, so feel free to pop me a note!

Win a copy of SOMEBODY TO LOVE! Post comments or questions and you'll be entered to win a copy.

Great interview. Somebody to Love sounds wonderful. I like the cover.

What a great interview and I just wanted to day that this book is already on my bookshelf...Can't wait to read it.. It will be another winner, that I am sure of..

I have been waiting for this book to come out as I always enjoy your books.

Thanks for the interview and what author is an autobuy for you.

Thank you for coming her to answer some questions. What was the first book that hit the NYT? What did you do to celebrate other than calling your friend?

A great interview. I remember reading GWTW and changing the ending to fit my thoughts and hopes for Scarlet and Rhett

I love Kristan's books. And I just want to offer my opinion that no, she doesn't spend too much time thinking about the characters! In each of her books, the characters really resonate with me. It's one of the things that make a Kristan Higgins book so special. Thanks for the interview and giveaway.

I've love to kiss Jeremy Renner too! Great interview and thanks for the giveaway!

Kristan, this sounds like another wonderful story from you! I am actually reading UNTIL THERE WAS YOU right now. I am loving the poignancy and the humor, and I absolutely adore Posey!

When I was a teenager and saw Gone With the Wind on television I felt the same way. Somebody to Love sounds like a story that deals with stuff you see on television but you never think about how it affects so many people.

i WOULD LOVE TO WIN THIS BOOK