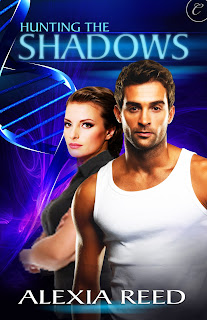 HUNTING THE SHADOWS is about a group of adults who as children, were genetically manipulated to become psychically enhanced “agents”. J.C., is a lead scientist and agent for his team. He’s tired of all the experiments and just wants it all to end, so he creates a plan to blow up the labs. He fails and is captured by the other members of his team and brought back for sentencing. As punishment, he gets his mind erased and then reprogrammed. In order to keep the connection to the only person who can communicate with her, Amy—a telepathic-empath—stores his old memories in her head. She needs his help and because he’s the only one willing to listen to her warnings about a killer, she risks everything to save him. As they work together to catch a killer their friendship turns into a relationship that is threatened when she finds out that he’s the reason she was locked away in the psych ward all her life.


Win a copy. See at the end of the post.

This is a tough one! I have a few but my favourite scene, I think, is when J.C. goes to Amy and tells her that she can go outside. Now, a bit of background information, Amy has never really been allowed to experience life. When she was a child she had the first of many seizures because of her abilities that forced the scientists and doctors to move her into isolation. Because of the fragility of her mental “shields” she hasn’t been allowed to leave her room or interact with others.

So in this scene, J.C. returns with a wrist band that will create the shields for her so that the thoughts and emotions of others won’t overwhelm her mind.

“Come here.” He crooked a finger and when she hesitated, snagged her wrist and tugged her forward, feeling her pulse bump against his touch. “Relax,” he whispered against her ear.
“I know what you’re capable of.”
He drew her between his thighs and waited until she stopped squirming. Her body pressed tantalizingly against his without her being aware of what she was doing to him. Gritting his teeth, J.C. hissed out a strained breath as blood arrowed to his groin. “You have to get used to being touched if you want to be on the outside. If you can’t handle even me then maybe you should rethink wanting your freedom.”
“Don’t worry about me.”
He chuckled at the tightness of her words but let the matter drop. “Well, I’m not taking the risk of sending you out there without some kind of protection.” He tied the leather band to her wrist, making sure the small watch-like device was turned on.
“What are you trying to say?”
“You’ll need to wear this band at all times when you step outside. It’ll create the shields and filters you need.” The spark of hope in her eyes made his lips twitch. “It’s your tin foil hat, Amy.”

I like to think I write both combined. I’m not very good at sticking with one type over the other. For the most part, J.C. is definitely alpha, but he has a good guy, softer side to him. He’s clearly in charge and his team listens to him (for the most part).

I was in grade 8. My friend was writing a book and I thought I wanted to as well. Somehow, it just stuck. I mean, when I was younger I used to “pretend” by designing my own book covers (Goosebump style!), but I never picked up a pencil to start until grade 8. I wrote ½ a book (YA about a psychic boy), but then got bored. In grade 9, J.C. and Amy were created in my head and I started to write their story (VERY different from what it is now, I’ll admit).

5.      Tell us a little about your daily writing routine. Are you a plotter or pantser?

Ah, daily writing routines and me don’t mix. It really depends on the day and what I need to do. If I’m writing, I don’t go by schedules per se. I’ll try to get 1000 words a day (I’m part of an awesome accountability writing group). Right now, I’m trying to get book 2’s editing finished, but at the same time, get some words into a new project, all around a full work week.

I’m a hybrid, mutant strain of a plotter and pantser, a plantser if you will. I do drafts. First draft, I need vague ideas of what I’m doing. Not an outline by any means but a mind map of the barest hint of bones. I will write as it comes to me in this stage, often writing out of order until I somewhat think I’m at the end. Draft 2 is when I do a full blown plot session with what scenes I have. I write them all down on cue cards and re-arrange and fill in the missing holes. Then I write to that plot. It’s all very chaotically organized. ;)

I have to write single spaced. If it’s double space, it reads incredibly stupid. Like, throw the book against the wall stupid. It just gives me a bad vibe. During edits when the book was in double space, I had to ignore the twitching. Not just because of the double space but because I don’t know how to edit with the track changes on. It messes up my page and I HATE that. It’s why I can’t write by paper much anymore (or do edits). The moment I ruin the flow of the page, it turns my OCD on and I need to go straight to the computer to make the change or get out a new page and rewrite.

That it’s such a rollercoaster. I’ve never been so overwhelmed with the up and down manic “I LOVE this story! My character is so great!” then a scene later “I HATE this story! Why won’t my character co-operate!”. Honestly, without the support group I have, I might have given up so many times (that said, I’m way too stubborn).

What authors or friends influenced you in helping you become a writer?
I’ve had a lot of writers help me in pushing me forward. I don’t know that I could name just one! I’ve made a lot of great friends over the years and they’ve all helped me in ways they don’t even realize.

9.       What does your family think about your career as a published author?

My family are very supportive. My parents seem to always be telling someone. Before I got published they were supportive, but they didn’t really like it when I’d bring my laptop into the livingroom and write while they watched tv. It wasn’t proper “family” time. Now I get “Are you writing?”

I’ll sometimes paint. I love doing it, but I’m very impatient. Honestly, I don’t have much of a life. I’ll always have a WIP open, even if I’m watching TV.

How can readers connect with you online?
Readers can find me on Twitter (@alexia_reed), Facebook, my site, or by email alexiareed.author@gmail.com.

Alexia is going to give away a download of her release HUNTING THE SHADOWS to one lucky poster. Ask her a question or comment and you'll be entered in a chance to win it!
at May 13, 2012

Wow, great to "meet" you, Alexia! Congrats on Hunting the Shadows! It sounds like a very engrossing read! Is it a stand-alone, or the start of a series? How fabulous that your family is so supportive! Do they read your stories?

They don't really read my stories to be honest. Not yet. I'm a bit nervous when I show early drafts because they change so much. That and my parents aren't huge readers. They don't have an ereader or anything so if I want them to read, I'll have to print it out.