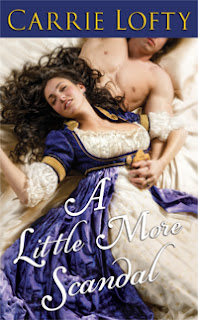 First off, thanks to RRT for letting me stop by! I’m excited to talk about “A Little More Scandal.” At just $.99… Take a chance! This is an adorable intro to my Christies series of Victorian romances.

It’s one of Pocket’s first original digital releases. You can read more about those fabulous new originals here [http://pages.simonandschuster.com/pocketstar/a-little-more-scandal], including an extended excerpt of “A Little More Scandal.”

But there. Aside from the blurb, that’s my sales pitch. On to the kissing! We’re romance readers. Kissing is like oxygen. Kissing is a many-splendored thing. Kissing lifts us up where we belong! (Any fans of Moulin Rouge! in the house?)

William crisscrossed his arms behind her back and her bum, then lifted her straight up from the chair. She gasped against his cheek. Any momentary shock dissipated as she sank more deeply into his embrace.

Catrin bit his lower lip, her smile returning in force. “So strong,” she whispered against his wet mouth.

His vision wavered at the edges. He was trying to intimidate her, not impress her, yet her breathy compliment thrilled him with a hard jolt. Yes, he was strong. He had forged himself into a man no one would challenge. Yet this tiny, curious woman shoved at his control with more determination every time.

He wanted to shove right back.

Far, far too much fabric separated her thighs from his hands, but her bodice was wide and generous in its display of creamy skin. He stripped off her bonnet with one quick flick of ribbon, then laid her back along the desk. No softness or sweetness now as he suckled kisses down her throat and across to her delicate shoulder. Catrin’s intake of breath urged him without words, as did her squirming, gently thrusting hips.

William adjusted their position so that she stretched flat against the unforgiving mahogany. His legs tucked against the yards of satin between hers. He bowed up and over her body, and pressed her shoulders back against the ink blotter. She arched into his hold, thrusting up her bosom.

I bet you can guess what happens after that, but wouldn’t it be more fun to read it for yourself? I hope you do!

Next up for Carrie:

STARLIGHT [http://www.carrielofty.com/Starlight.html] is the second full-length romance in the Christies series, set in Victorian Glasgow. It was just given 4 ½ stars and chosen as a Top Pick from RT BookReviews. It’ll be released in paperback and digitally on June 26 from Pocket.

HIS VERY OWN GIRL [http://pages.simonandschuster.com/pocketstar/his-very-own-girl] is a historical romance set in WWII England. Seriously. Not women’s fiction. Not literary fiction. A full-on honest to goodness historical romance. Another Pocket Star digital original, it’ll be available September 4.

If possible, I’d like to give away a copy of FLAWLESS [http://www.carrielofty.com/Flawless.html], the first of the Christies series from Pocket. I’ll ship anywhere. Anyone who already has FLAWLESS can win any choice from my back catalog.

Hi Carrie! Congrats on being the first eBook spin off with your publisher! It so has to be special! They have given you beautiful covers with these blurbs! How many books planned of this Christies series?

Hi Carrie, I see that you are planning to have a story set in WWII. What made you to decided to write a story in that setting as pose to any other time.

Hi Carrie.. you must be thrilled at having your book e-published and I am sure it is going to be flying off the on-line shelves... I love to see books set in Scotland and I love WWII settings too..
superauntkx9_(at)live(dot)ca

Ohhhh! Sounds so fantastic! I can't wait to start this series!

Moulin Rouge is one of my all time favorite musicals. Who knew Ewan and Nicole could sing?

Caffey: I have been SO lucky with my covers! Pocket has an amazing art department. I love that she's a heroine who's actually smiling. Why not? Great hair, great dress, naked buff guy--big grin! And there are four planned in the series, each following one of the four siblings: older brother Alex (STARLIGHT), Vivienne (FLAWLESS), and the twin, Gwen and Gareth. Soon!

Melody May: I have been fascinated with the WWII era for about twelve years, since just after finishing my master's thesis (about Old West gunfighters! Quite a change!). The immediacy of the war made for some fast, exceedingly romantic relationships. I really wanted to explore that potential for quick but everlasting love. I hope you check out HIS VERY OWN GIRL on Sept 4.

Kathleen O: Thanks! This was my first Scottish-set romance, and HIS VERY OWN GIRL is pretty much one of the first WWII historical romances ever. I can't wait to see how it's received by readers.

Chelsea, and Maureen: Thanks so much! I hope you enjoy it.

Laurie G: I was surprised too! But it would've been SO wrong had they used other singers. The ending is incredibly tragic, but I weep through it because of Ewan's amazing performance. Just...wow.

Ah... great excerpt, Carrie!! Thanks for the cool post today! No need to include me--but whoever wins is in for such a treat. Carrie writes so beautifully!!!

Thanks for the great excerpt and the story looks like a good one.

flechen1: You are adorable. Thank you!

Maureen: Glad to see you here :)