Q & A with Ava Michaels 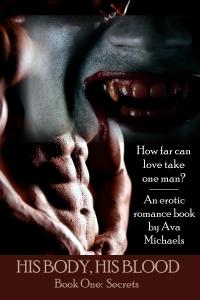 HIS BODY, HIS BLOOD is a new series of mine, featuring a gay vampire hunter named Van Scott. Van’s a really cool bad ass kind of guy. He’s not someone you would look at and think he was gay, which just adds to his aura. He’s a secluded kind of man, dealing with a little bit of a haunted past that started when his father wouldn’t accept who he was.
The first book in the series is called Secrets and it has Van Scott protecting a man named Daniel Winters. Normally, protecting people is easy for Van. But there’s something about Daniel that Van can’t put his finger on. The organization Van works for gives him two warnings… (1) If Daniel Winters dies, the world ends and (2) Do NOT fall in love with Daniel Winters…
At first these rules seem pretty easy but it’s far from it as vampires start coming to kill Daniel. And the more Van spend times with Daniel, the more he feels his own urges starting to rage. In the end, it’s Daniel that perhaps has the biggest secret of all.

The final scene for sure. The book was made around the final scene. It’s a pure action scene where the entire story comes together in a way that it makes you unable to stop reading until you finish it.
I will add that in a very close second are the “hot” scenes… two men… yummy.

3. Do you write about bad boys or good guys?

What’s wrong with both? :)
I like men that look bad but have good hearts.

4. When did you first realize you wanted to be a writer?

When I was twelve and I wrote a short story about a girl who would write poetry and it would come to life. Don’t ask… it was a weird story, but it got the pen moving and since then it hasn’t stopped.

5. Tell us a little about your daily writing routine. Are you a plotter or pantser?

A little of both. I have a general outline I use. I have the obvious key points for the story and then I just run with it. I keep very detailed notes so the story doesn’t derail – especially with a series. I can’t quite say how many books HIS BODY, HIS BLOOD is going to be, so I’m sure to keep it all together.


6. What would you say is your interesting writing quirk?

Men enjoying each other’s company. As a woman, it just fascinates me… and turns me on.

7. What was one of the most surprising things you learned in creating your books?

How much I liked to write action scenes. I started with the character of Van Scott and wasn’t sure if I could handle him. I didn’t want him to be laid back or cool or lame. I wanted him to be mysterious, action packed, and filled with emotion. I wanted him to be able to pour his heart out one second and fight the next. When I started writing the fighting scenes I wasn’t sure what to expect, but I really enjoyed it.

8. What authors or friends influenced you in helping you become a writer?

Well, everyone knows that my BFF is Betty Midnight. She actually pushed me into this big time. I had told her about my idea a while back and she urged me to do it. I refused over and over until finally she wore me down and we ended up writing a book together (His Best Friend’s Bed) and ever started a four book series (Hadyn Heat). Once we got done with the first book of Hadyn Heat I realized that I could handle this on my own… and from there I started work right away on HIS BODY, HIS BLOOD.

9. What does your family think about your career as a published author?

Lucky for me, everyone is supportive. I don’t have much family but my friends are really great. They’re the ones who read the books first before it goes to the editor.

10. Besides writing, what other interests do you have?

Sadly, I’m really boring. I love to read… like a lot. And I’ll read anything. Any genre. Nonfiction. Anything. I love television and as much as I hate to admit it, I have NOT seen ANY vampire shows. I don’t care for them… I like my vampires.

11. Can you tell us about what’s coming up next for you writing wise?

Right now, the second book of HIS BODY, HIS BLOOD is being sent through the final edits. I ended up writing both books one and two together to prove I could do it.
Betty and I have been working on Hadyn Heat book two which should see life by May.
Other than that, I’m enjoying this process and writing short stories.

12. How can readers connect with you online?

Wow, I’m TERRIBLE at the online stuff. I have a site http://www.avamichaels.blogspot.com/  but it’s a dead zone. I’m with Betty on a site called The Sex Clique (http://www.thesexclique.blogspot.com/ ) which is a group of erotica writers who share books and posts. I swear though that I plan on getting more active on my own site… but honestly, I’d rather be at the keyboard bringing more of Van Scott’s story to life!


Blurb for HIS BODY, HIS BLOOD:

The organization he works for is a secret, and when they ask him to protect a sexy man named Daniel Winters, the secrets only seem to pile up.


Van’s lust for men has burned inside him for years, and even cost him his relationship with his parents. He has always been able to control himself and his secrets, but with Daniel Winters, he feels as though he cannot control himself.


There’s only one rule Van must follow when protecting Daniel: do not fall in love.


After a vicious attack by a nest of vampires, both Van and Daniel are left vulnerable and soon secrets are exposed and rules are broken… but it is Daniel Winters who holds the biggest secret of all.

You can purchase HIS BODY,  HIS BLOOD at:


Have a question or comment for Ava? Then post away as she will be stopping by to answer you.
at February 21, 2012