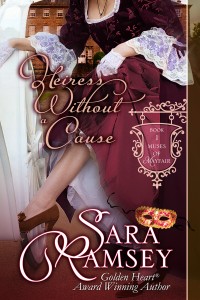 What’s the most awkward question a writer can get? When my debut novel, Heiress Without A Cause, came out two weeks ago, I expected strange glances from former coworkers and knowing leers from my friends. After all, it is a Regency romance with several very sexy scenes – not exactly standard dinner conversation.

But questions about the sex scenes almost never come up. Instead, I’ve discovered the question that makes me far more uncomfortable.

Is such-and-such character supposed to be you?

Others suspect that Madeleine’s friend Amelia, who stars in my next book, must be me because she’s a writer. That’s like saying I must be Ernest Hemingway’s twin because we’ve both written novels. I’ll admit a secret weakness for daiquiris, but that’s where the similarities between Mr. Hemingway and I end.

So, no, I’m not a ringer for any of my characters. But I do have something in common with all my heroines – the unwavering belief that women can and should pursue their passions. The journey my characters face is one we all go through – learning how to be ourselves without sacrificing all the relationships (love, sex, friendship, family) that make life so wonderful.

Heiress Without A Cause is the first book in my Muses of Mayfair series, featuring four women who are each pursuing a different artistic passion. They must keep their identities secret from the ton, but they support each other through all their endeavors – including all the twists and turns that lead to them meeting their perfect (for them, at least :) ) mates.

So if I do have anything in common with my heroines, aside from hair color and humor, it’s definitely a belief that pursuing your dreams isn’t just possible, but necessary – and having great friends and family makes it even better. Holding my debut novel in my hands has only reinforced that belief.

I would love to hear from you – what passion do you want to pursue? Or are you still figuring it out? One commenter will win an ebook of Heiress Without A Cause, which is out now as a Nook First exclusive and will be available on Kindle and other ebook retailers on February 24th.


About the Author
Sara Ramsey writes fun, feisty Regency historical romances. She won the prestigious 2009 Romance Writers of America Golden Heart award with her first book, Scotsmen Prefer Blondes (formerly titled An Inconvenient Marriage). The prequel, Heiress Without A Cause (formerly titled One Night to Scandal), was a 2011 Golden Heart finalist.

Sara grew up in a small town in Iowa, and her obsession with fashion, shoes, and all things British is clearly a rebellion against her hopelessly uncool youth. She graduated from Stanford University in 2003 with a degree in Symbolic Systems (also known as cognitive science) and a minor in history. Sara subsequently worked at Google for seven years in a variety of sales, management, and communications roles. She left Google in 2010 to pursue her writing career full time. Read all about her Regency obsessions and upcoming works at http://www.sararamsey.com/. Or, follow her slightly ridiculous Twitter feed, @Sara_Ramsey.
at February 12, 2012

WOW! What an exciting path you took to your writing career.

Have you ever been to Britain for fun and research?

I enjoy reading about intelligent, unconventional heroines. I'm definitely going to look for your quartet of smart women in your Muses of Mayfair series.

I can't think of any passion I'd really like to try. I've gone downhill skiing and learned how to knit.

Now I want to enjoy my 3 month old granddaughter, Nyah!

I'm a big believer of following your passion, even if it isn't something that you make your career, but remains a hobby.

I'm still finding mine, but I would love to find more time to pursue being a professional graphic book cover artist.

Congrats Sara! I love the sound of this book and the whole series.

Hi Sara, Always pleased to meet a new author writing in my favorite genre. Your books sound interesting and I'm putting them on my BTB list right now. Love the fact your titles are a play on old film titles...catchy! Loved the covers too.

Thank you so much, everyone, for stopping by!

@Laurie - congratulations on your new granddaughter! That's such a fun age, and I think it's wonderful that you can spend time with her. I've gone to Britain several times - twice before I was writing romance, and one pure research trip after I started writing. London is one of my favorite cities, both alone and with friends/loved ones - I go alone for research, though, since no one else seems to want to spend hours looking at dishes and doorways and obscure museums ;)

@Booklover - thank you! I'm so in awe of visual artists like you. My affinity for words definitely didn't extend to other arts. I have some musical talent, but my drawings all come out like stick figures, and no one wants to be on my Pictionary team :) Good luck with your passion, and I hope you find time for it!

@Karen H - I'm happy that you love the titles - I definitely had fun coming up with them! Lovely to meet you too, and thanks for commenting.

What a fun column--you had me at statuesque lawn gnomes. I'm betting your book is fun reading, too, and adding it to the TBR list. Thanks for visiting.

Congrats on your debut release, Sara. I'm guessing authors are always asked by their family and friends if a character is based on them. Looking forward to reading "Heiress Without a Cause."

@LSUReader - thanks for commenting! Unfortunately there are no lawn gnomes, statuesque or otherwise, in Heiress Without A Cause, but I hope you'll enjoy it anyway :)

@Jane - yes, I would imagine a lot of debut authors get asked this. I just wasn't expecting it - silly of me, I know! Thanks for commenting!

Congratulations on your new book! I am always coming up with new ideas of things I want to pursue from quilting to photography. Right now it is time to plan the garden so that is my current pursuit.

@Maureen - thank you for commenting! I used to be very interested in quilting and embroidery, but I've slacked off on my projects - there just aren't enough hours in the day.

I'm jealous of your gardening, though. I would love to garden, but I live in an apartment and travel just a bit too much. I might only be able to raise cacti and other desert-friendly plants that don't need a waterer :)

Sara, Congrats on the debut! I love reading romances where the heroine has either a profession or artistic pursuit, showing their intelligence and passionate pursuits.

I never settled on just one passion, I like to dabble in a vareity of things,

Pam, thank you for reading the post! Dabbling with a lot of passions is great - I love to write, but I think I would go crazy if that was the only thing I did!

Just wondering if a winner was ever drawn for this giveaway?