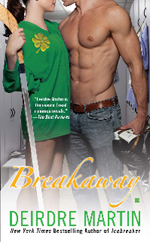 They had it all planned out: college, marriage, happily ever after.
But it didn't quite work out that way...


Erin O'Brien was everyone's favorite in Ballycraig, while Rory Brady was the town's golden boy: the local lad who moved to America and became a professional hockey player. Rory promised to return to sweep Erin away to the life of her dreams in New York. But the bright lights and late nights turned his head and he never came back.


Two years later, Rory realizes he's made the worst mistake of his life. Heading back to Ballycraig, he's confident that all he needs to do is flash his winning smile and Erin will fall back into his arms. But Erin's moved on.


Racing the clock, Rory needs to prove to her that the man she fell in love with is still there. But can happy-go-lucky Erin risk it all and give another chance to the man who broke her heart?


Okay, here we are six weeks into the new year. Tell us about your favorite read so far in 2012.

Be entered to win a copy of this book.
US and Canada mailing addresses only.

Favourite read so far is Darker After Midnight by Lara Adrian :)

Last Man Standing, Cindy Gerard -I liked Stephanie! She went after what she wanted. She grew as a person.

Until There Was You by Kristan Higgins.

Love Deirdre's books; thanks for giving away a copy.

Navarro's Promise by Lora Leigh. I am loving her Breeds series.

Princess Charming by Nicole Jordan.
Thanks for the giveaway. Sounds like a good book.

I am going to pick a new to me author. Marie Carr's Come Monday, her first book in her Wild Irish series. I love this series so far..

This is hard so I will cheat and pick 2:
Darker After Midnight by Lara Adrian for February
Lothaire by Kresley Cole for January

Hmmmm I havent read too many books this year as I've been doing my own writing. LOL I think my favorite right now is SERENDIPITY by Carly Phillips. I really love her small town stories. She makes the town come alive and, having lived in upstate New York, I feel like I've lived in places like Serendipity ;)

My favorite read has been Leslie Tentler's "Edge of Midnight."

So far my favorite reads in 2012 is Sleepwalker by Karen Robards and Dream a Little Dream by Susan Elizabeth Phillips. Also, notable is Catching Jordan by Miranda Kenneally. This was my first YA book in awhile so I'm glad to dip back into the genre.

I'm glad to see more sport romances and it happens hockey is a favorite sport.

I don't think it was published in 2012, but my favorite thing I've read so far this year is Anna and the French Kiss by Stephanie Perkins.

I would say my favorite is The Danger of Desire by Elizabeth Essex.

Joan Swan's FEVER - I was surprised how much the story drew me in.

So far it's been Jeannie Lin's The Dragon and the Pearl, followed closely by Ann Aguirre's Enclave.