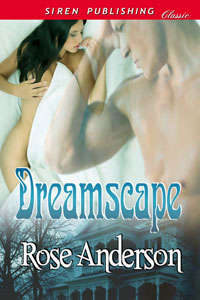 First off, I’d like to say thank you for hosting me this week!

My most recent novel in print, Dreamscape, released over the summer. The story is unusual in that it stretches across genres. First of all it’s classified as a contemporary erotic romance. It’s a ghost story, and in a way, a time travel too, but it’s also a mystery and suspense. As if that’s not enough to chew on, I’ve loaded it with clues hinting at a story running behind the scenes. I was a big fan of Agatha Christie who often put details hinting at the outcome right out in the open for readers to trip over. I had fun writing it and my hope is my readers will enjoy the Easter egg hunt I’ve set before them. I’ve even left you all a clue to the truth right here too! :)

Without giving too much away, I’ll start with the blurb so visitors here will have some background to go by.

Unable to deny his own translucence, Dr. Jason Bowen determines his lack of physical substance could only mean one thing—he’s a ghost. Murdered more than a century before, Jason haunts his house and ponders the treachery that took his life. When Lanie O’Keefe arrives with plans to renovate her newly purchased Victorian mansion, Jason discovers, ghost or not, he’s still very much a man. Despite its derelict condition and haunted reputation, Lanie couldn’t be happier with her new home, but then she has no idea a spirit follows her every move throughout the day and shares her captivating warmth at night. Jason soon discovers he can travel through Lanie’s dreams and finds himself reliving the days before his murder with Lanie by his side. It took one hundred and twenty years for love to find them, but there’s that insurmountable little matter of Jason being dead.

Once Jason realizes he can ride Lanie’s dreams to his time period, he looks for every opportunity to do so because he has no recollection of his murder and not knowing has dogged him for one hundred and twenty years. My favorite scene takes place in Jason’s past where he and Lanie overhear a conversation between his wife and her accomplices as they plot his death and the reason for it.

When I wrote this portion of the story, it was Muse possession. My Muse grabbed my brain and the scene poured onto my laptop. It was one of those moments where a writer really has no idea where the words are coming from. It was exhilarating creativity. The kind that makes you shake your head and say, wow that’s good. Did I just write that?

In high school. I had an honors English class and the teacher set the theme for a composition after we’d read The Hobbit by J. R. R. Tolkien. I wrote about a dragon waiting on her egg to hatch. That first composition put me in the zone. It basically wrote itself. The teacher kept it with praise saying I needed to pursue writing. I didn’t take her seriously but I did take journalism classes and got on the school paper because of her. Boy I wish I still had the dragon story. I have a perfect dragon illustrator and I’d publish it. But I wrote it a zillion years ago before zerox and computers allowed you to copy anything with ease. As a student, I wasn’t about to write the thing out by hand twice! It wasn’t until my son was little that I started writing again with a seven book series to teach him to read. I’ll publish that one of these days too

4. Tell us a little about your daily writing routine. Are you a plotter or pantser?

Oh definitely a fly by the seat of my pants gal. I’ll have a general idea but that’s all. My characters write themselves. I just help with coloring their world. When I write I’m either an eavesdropper or a voyeur!

I write at least six out of seven days a week – all day and occasionally into the night. My butt’s taken on the shape of the chair. I’d recently read how dangerous is it to sit all day so now I’m attempting to take breaks and walk the treadmill. If I could figure out how to tape my laptop to the threadmill I would!

Quirk? Hmm…I don’t know that I do anything other writers don’t. Perhaps carry on character conversations with myself in my head? I say that because the voices aren’t even mine. LOL

Within the realm of writing I’d say it’s falling into that zone I mentioned above. Hours will pass when I’m composing from that mindset. I once knocked out seven chapters in one sitting because the words were just flowing. Outside the realm of actual writing, it has to be discovering promotion was going to take up more time than I ever imagined. I wish that wasn’t the case because there’s only so much creativity in my head each day. It tends to sap the creative spark.

My husband is a fabulous essayist. He’s the one that got me into writing. We use to play Dungeons and Dragons role play online back in the old AOL chat room days. The first time he read a scene I’d written, he looked at me with surprise and said, “I had no idea you wrote fiction so well.” Like I said, I only wrote in high school. He’d never seen any of that stuff and my son’s how-to-read books were very simple things. Believing I could do this, he found a contest for me to enter. I won. :)

Beyond the teasing Mom writes smut comments they occasionally toss out, they tell me they’re very proud. I only recently came out of the closet so to speak. They were floored that I did this without anyone knowing. My son so eloquently put it this way, “Mom, you can’t even keep Christmas presents a secret, how did you keep this to yourself?” Every once in a while I get the last laugh.
at December 08, 2011

Thanks for having me today Patti. :)