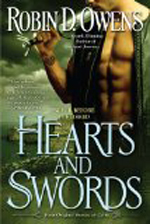 In Space and on Celta - in the Future

Nuada's Sword and two other starships have been cruising outer space for two hundred and fifty years looking for a planet that they can colonize. The people on board the three craft have left Earth after being targeted for having psi or what they are now calling Flair (psychic powers), and many of the original crew are in cryogenic sleep pods. Awakened from his pod is Kelse Bountry who is needed by the present crew to stop a growing mutiny by a small group of young people who don't believe in the original quest. They are determined to take the ship through a wormhole, which may send them back to Earth, and possible death or war. While his wife slumbers in her pod, Kelse takes control. With the previous captain recently murdered, along with three security guards, Kelse is well aware that he has to find a way to get the ship back on track. But can he do this without his beloved wife, Fern?

Arbusca Willow, nickname Blush, has finally contacted her HeartMate and is nervous about meeting him. Years ago, her overbearing mother sent him away when he came to meet her, forcing Blush to marry another. Now a widow and with her mother dead a year, Blush has the courage to meet Dri Paris. But their first encounter doesn't go so well. Dri and Blush have a lot of anger to get past, both with each other and with her mother. Dri makes the next move, though, asking for Blush's help in finding a family heirloom in his great uncle's cluttered house. Blush realizes this is an opportunity for them to work together and, hopefully, resolve their issues.

Genista Furze has started a new life in Gael City, far from her ex-husband Tinne Holly and his Noble Family. Calling herself Nista Gorse, she is working for a clockmaker and settling into her small cottage. Her life now is vastly different from the one she led in Druida City , quieter, maybe a little lonelier, but Genista is determined not to be the selfish woman she once was. As she leaves for work every morning, and upon her return in the evenings, her neighbor always seems to be working in his yard. Cardus Parryl nods and speaks to her, and soon the two become friends. Genista is well aware of her reputation prior to her marriage, so she maintains a certain distance from Cardus, despite being attracted to him. But Cardus is more than just a neighbor, and he hopes Genista won't hate him when she discovers his secret.

To his stunning surprise, Commoner Walker Clover experiences three Passages (dream quests to free his psi power) at once, and when he comes to his senses, his parents reveal yet another shocker—his biological mother is a Noble, not the sweet woman who raised him. Everything he is comfortable with is gone, for he now must learn how to be a Noble, and a leader. And who better to ease him into this transition but another Noble. Sedwy Grove is pushed by her mother to step up to the challenge, but does Walker know about her past?

Having thoroughly enjoyed all of the Heart books by Robin D. Owens, I was thrilled to read HEARTS AND SWORDS, which puts several areas of the novels into perspective. Beautifully written, as always, all four stories will grab the readers within the first few sentences. Don't miss this excellent Perfect 10 book.

Email ThisBlogThis!Share to TwitterShare to FacebookShare to Pinterest
Labels: A Perfect 10, Fantasy

I also like Owen's books. I will have to check this out!