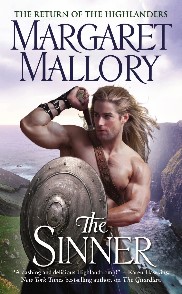 His lovers adore the sinfully handsome Alex MacDonald as much as he loves women. One of the MacDonalds of Sleat and cousin to Laird Connor MacDonald, Alex has no interest in marriage and resists his attraction to the Laird MacNeil's daughter Glynis. He is more interested in finding and destroying Connor's uncle Hugh, a fugitive raider, who wants to usurp the lairdship. However, a seer's prediction and circumstances throw Alex into Glynis's company for a prolonged period.

Glynis MacNeil stabbed her abusive former husband, Laird Magnus Clanranald, before she left him. She doesn't want another marriage, but her father is being very insistent. She blackmails Alex MacDonald into accompanying her to Edinburgh so she can escape her family and live with her mother's relatives. Since he has to go to Edinburgh to see a woman who promises him a surprise, Alex reluctantly agrees.

Marriage interests neither Glynis nor Alex, and Glynis wonders how any man known as much for his conquests of women as for his fighting skills could ever marry a woman without eventually philandering. She knows she won't ever put up with another such man, and worse, she knows Alex would break her heart. Neither of them considers the vileness of Hugh MacDonald or Magnus Clanranald.

Author Margaret Mallory writes a love story between two antagonists who must also fight rebels, raiders, and relatives, yet their greatest challenge might well be trying to trust one another. The characters are very believable, the background historically accurate, the situations emotional, and action vivid. This creates a dynamic read that historical romance fans will love.