Q & A with Angela Campbell...and a giveaway! 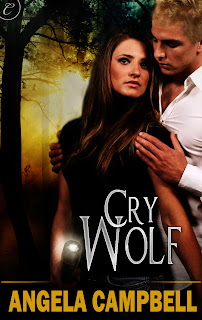 First of all, thank you for allowing me to be here today, Patti. My newest release is also my debut release, “Cry Wolf” from Carina Press.
My heroine, Andrea Lockhart, is a feisty tabloid reporter sent to a rural town in South Carolina where the residents have been reporting sightings of a werewolf — not that she believes for a second that werewolves exist. But trouble has a way of finding Andrea, and no sooner does she set foot in the small town than trouble finds her in the form of Sean Hunter, her former college crush and journalism school nemesis. Andrea wants nothing more than to hightail it out of the place, but no way is she gonna let Sean scoop her again, on anything! So what if he’s even hotter than she remembered? What’s a girl to do? Team up with her competitor to keep an eye on him, of course! Sean is 100 percent male and more interested in getting to know his old classmate now that she’s blossomed into a woman than he is in any story investigation. Then again, there is the fact that people are seeing something in the small town…
“Cry Wolf” could be described in so many ways. It’s a mystery, but it’s also a contemporary romance. There’s a dash of the paranormal. There are even a few scary bits, and one or two scenes that will probably get a chuckle out of you.

Oh my gosh, just one? I’ll have to go with the opening scene, where my heroine finds herself in an, ah-hmm, odd predicament before meeting the hero. To try to get some of the accuracy, I spent a lot of time hanging upside down off my bed to be able to describe how she was feeling. My cat thinks I’m a lunatic for doing it, but as kooky as it sounds, I actually had a lot of fun doing that piece of research!

I can’t remember a time when I didn’t want to be a writer. When I was very young, I would go to the movies with my older brother and come home and rewrite my own version of what we just saw, and then act it out with my stuffed animals. My mother, who died from breast cancer when I was 12, always encouraged me to write stories for her enjoyment, and after she died, I tended to escape my grief a lot through books, movies and writing. I went into journalism because it was one of the few writing careers I could convince my father I would be able to earn a steady paycheck from. I just couldn’t envision making a living doing anything else.

4. Tell us a little about your daily writing routine. Are you a plotter or pantser?

I work full-time – as a newspaper reporter – so I am always writing in one regard or another. I usually write my fiction stories late at night. I’m a night owl, and that’s when my creative juices start flowing, and I’ve been known to stay up until 5 or 6 a.m. when I’m on a roll. I’m more of a pantser than a plotter. I come up with the characters and a basic plot, and let it all unfold as I type. Once I have a first draft complete, that’s when I go back and make sure there are no plot holes you can drive trucks through.

It’s probably the norm – I hate to be bothered when I’m deep into writing a story. I’m really good at blocking out everything (sounds, people, hunger, etc.) when I’m writing. I can become a real bear and have been known to growl if someone interrupts me when I’m hearing my muse.

This is probably going to sound stupid. When I was a much younger, more naive writer, I used to think I could craft a completely original idea from scratch without being influenced from someone else’s previous work, period. I’ve since realized there are few, if any, completely original ideas floating around my brain – they are all inspired by people I know or other works, some good and some bad. Every time I think I’m onto an original idea, it hits me that someone could easily make a comparison between it and something else. I usually slap my head and have a “D’oh!” moment. And then I try and find a way to take that idea, put a fresh spin on it, and make it my own.

I don’t think it ever occurred to me I could actually write a book until I began reading Harlequins in college. I remember enjoying books by Lynne Graham and Maggie Shayne so much that I went online and looked the authors up. I believe it was Maggie Shayne who had a “tips for aspiring authors” page on her website. I checked out some of the books she recommended, read them, and just began writing for fun. Granted, it took me a while to actually finish my first book, but I am blessed with some incredibly supportive friends who kept cheering me on, telling me I could do it. Since then, I’ve also found some wonderful critique partners, some of whom are published, such as Pamela Hearon.

I’m not married, and it has taken me a while to “come out” as a romance novelist to my dad and brothers, simply because I’m not used to being the center of attention (it terrifies me, actually) and I anticipated a lot of jokes. My 21-year-old niece was on vacation with me in NYC when I got “the call” from Angela James at Carina Press, and for some wacky reason, now seems to be following in my career footsteps. She’s studying creative writing and hopes to be an author someday herself. After I sent one of my brothers the link to my book, he proudly pasted it as his Facebook status within 10 minutes, telling everyone his little sister was gonna be published and “how about that?”

I am a huge film buff and dabble in amateur filmmaking. I’ve even worked as a production assistant on some TV shows, short film projects and commercials. Aside from reading books of all genres (including comic books!), I love to escape my worries in a dark theater or a great TV show. I also love animals.

I just completed a novel that I’m hoping to submit to publishers soon. It’s the first in a planned trilogy. It’s a paranormal and very different from “Cry Wolf,” but it also features werewolves. It has an epic fantasy premise that early readers say they have really enjoyed.

I’m always goofing around on Twitter @angelacampbel. My website, http://www.angelacampbellonline.com/ , also has my contact information. I love to hear feedback, so readers are encouraged to drop me a line.


Blurb for Cry Wolf, out now from Carina Press:

Andrea Lockhart's job as a reporter for cheesy tabloid The Naked Truth isn't exactly where she thought her journalism career would end up. She's determined to make the best of it, but when her editor sends her to Woodbine, South Carolina, to investigate a werewolf sighting, Andrea decides the ridiculous assignment will be her last. Until she meets Sean Hunter.


The last time she saw Sean, he had just beat her out for the position of editor of their college newspaper, and told her she'd never make it as a reporter. Given his grand ambitions, she's shocked to find him editing the Woodbine Weekly. Once they start competing for leads on the werewolf, Andrea becomes determined to break the story first;she can't let Sean beat her again.

As they each get closer to finding the source of the rumors, the only thing more surprising than the truth are the feelings Sean is able to stir in her, feelings she thought she had left behind.

Angela is giving away to one lucky poster an e-copy of her book. Post any comments or questions for her and you'll be entered in the drawing. Good luck!
at November 03, 2011

Congratulations on Cry Wolf! This sounds like an awesome book and I definitely am interested in a chance to read it. I also like the sound of the series your working on, I hope to hear more about it soon.

I'm pretty sure most cats think that 99-percent of what we humans do is sheer lunacy. (It's possible our feline overlords are right.)

Heh, what we writers do for our craft.

Congrats on your debut release. It's precious that you used to rewrite movies and act them out with your toys. Thanks for a fun interview.

Happy release to you! This book sounds like it has a bit of everything and werewolves are pretty fun to read about.

Congrats on the release of Cry Wolf.It sounds like a great book.

Does the characters on the cover resemble how they are described in the book?

Thanks for the giveaway
elaing8(at)netscape(dot)net

Thanks for the comments and entries! @elaing8, I think the heroine is a fair representation on the cover, but the guy on the cover doesn't really fit the book's description of Sean much at all. I admit, I was a little disappointed about that, but I was thinking more along the lines of a younger Matthew McConaughey when I was writing that character.

Congrats on Cry Wolf, Angela--I like the sounds of it! How exciting that your family is supportive--nothing beats that, even if they may not read that genre normally :) Looking forward to your new series, too--I love knowing more books are coming :) Did you do anything special to celebrate this debut?

Thanks, flchen1. As my release date was on Halloween, I suppose I celebrated by watching classic scary movies with my friend -- so not much, I'm afraid! I did, however, begin listening to the audiobook version, which was quite a surreal experience.

This sounds great, congrats on the release!