Please welcome historical author Michelle Marcos to the RRT blog! Check out the last question, as she has a contest to win a copy of her book to one winner. You will need to post in the comments and then head over to the contest page on her website.

Without further adieu...here is Michelle Marcos! 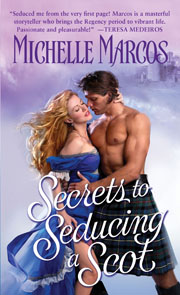 1. Tell us about your newest release.
Happy to! SECRETS TO SEDUCING A SCOT is the story of a socialite who writes a sizzling newspaper column that sets all of Regency London ablaze. Her father, who is an ambassador, is sent to Scotland to quell a rebellion, and Serena finds herself uprooted from her cosmopolitan lifestyle. But when Serena’s life is threatened, her father hires a protector to safeguard her well-being. Malcolm Slayter is a fearsome man, skilled in battle and criminal detection, and not beholden to any clan. He’s also the first man Serena’s ever met who is completely unmoved by her sway. She bristles under the strictures Malcolm places upon her, and his constant supervision infuriates her. But he’s also extremely attractive, and she decides to discover what it is that makes this brute tick. Serena soon learns that there is no party in London quite as electrifying as a revolution in Scotland, and the only thing more intriguing than a man in a kilt…is a man out of one.

Without giving away any spoilers? OK, let’s see. One of my favorite emotional scenes in the book is a (literal) cliffhanger. It wrung some tears from me as I was writing it, and many months after I had turned it in and was proofreading the edits, I cried all over again!

One of my favorite sexy scenes was when the spoiled Serena finds herself on Malcolm’s lap…but facing altogether the wrong direction.

When I was eight years old. I wrote a poem that my teacher submitted to the Dade County Youth Fair, and it won first place. That’s the first time I remember believing that I might, just might, have some talent. (Incidentally, for you writers out there, that doubt never seems to go away.)


I’m inspired by other people’s art. For instance, the idea for SECRETS TO SEDUCING A SCOT developed while I was watching reruns of Sex and the City: I began to wonder what would happen if a woman like Carrie Bradshaw was living in Regency England. The second book in the Highland Knaves series [LESSONS IN LOVING A LAIRD, February 2012], germinated from a simple photograph of a woman reclining atop a window sill in a crumbling wall. From that alone developed a scene that grew into the entire story. Inspiration strikes in the most unlikely places, so I have to remind myself not to be in such a hurry that I miss it.

I’m a frightful eccentric, so it’s become difficult for me to discern what seems quirky to other people. I suppose one of the things people find odd about me is that I prefer to write in public places. I can write at Starbucks or Wendy’s just as well as I can a hushed library. The noise is not distracting…in fact, it fuels the process. I also love movie soundtracks, so I’ll play them while I write or read—it just helps to create the imaginary movie in my head. I also tend to plot better in the wee hours, so I’ll drag myself out of bed around 4:00 AM. The most interesting ideas emerge when your brain is still in la-la land.

The most surprising thing is discovering how hard writing is. I once saw a documentary about one of the pioneers of early romance novels. It showed her lounging on a fainting couch in an organza dress dictating her words into a tape recorder for her secretary to transcribe. Hers seemed a glamorous life, God bless her, but alas it is nowhere near my reality. I wrote most of my second novel from inside an empty warehouse with no air conditioning during the middle of a sweltering Miami summer during my lunch breaks at work. I learned that if you want something badly enough, you’ll sacrifice quite a lot to achieve it.


My sister, Mabel, was a great help to me as I wrote my first book. Though not a writer herself, she was a voracious reader. She let me bounce ideas off of her, critiqued my chapters, and bolstered me when I’d lost all belief in myself. If you have a Mabel in your life, count yourself blessed.


I didn’t know any authors personally when I was starting out, but I took their written advice to heart. Stephen King’s On Writing was incredibly informative for me, as was William Noble’s Writing Blunders and How to Avoid Them. And I still have my yellowed copy of the 1989 edition of How to Write a Romance and Get it Published by Kathryn Falk.

I’ve got a hugely supportive family. My four sisters (all our names begin with M) and my brother are very proud of me, and that means a lot. My parents bore everyone they meet with news of my publication, even though they’ve never read my books. They don’t read English, you see, but I tell them what happens in the stories…minus the sex scenes, of course.

I love animals. All kinds. If I had grown up on a farm instead of the inner city, I would have been perfectly content to care for all the livestock and pets. When I was a little girl, I wanted to be a zoologist like Marlin Perkins of Wild Kingdom. I can still tell you the taxonomical nomenclature of the Brazilian tree frog and all the interesting characteristics of the common ant. I’m a treasure trove of useless information.

Having just turned in the second story in the Highland Knaves series, I’m eagerly looking forward to beginning work on the third book. The story is incredibly daring for me, as it involves two characters who are a) embroiled in international espionage, b) disparate in age (help me out, people: what’s a 19th century term for “cougar?”), and c) on the high seas. So you’ll probably find me in the middle of a busy Starbucks with headphones playing Pirates of the Caribbean while finding a way to save my heroine from the jaws of a Galeocerdo cuvier.

I spend entirely too much time conversing with people on Facebook, so join the party! I can be friended at http://facebook.com/michelle.marcos . I have also recently joined Twitter (@Michelle_Marcos), making me a fledgling Twit. But if readers really want to connect with me personally, send me an email at michelle@michellemarcos.com .

Oh, and I’m running a contest on my website right now. If you want to win an autographed copy of SECRETS TO SEDUCING A SCOT, just sign up here.


Thanks so much for having me on Romance Reviews Today! I love hanging out here.

@****@
Learn more about Michelle and her books by visiting her website at www.michellemarcos.com
at August 03, 2011

Thanks for the interview. Michelle is a new to me author, but I found this book on Goodreads a week or so ago and was curious about it, so imagine my delight when I saw Michelle was at RRT today!

Sounds like a great story, and I do love a hero in a kilt. Can't wait to read it! Congrats.

The cover is a beauty. I really like the idea of a socialite writing a sizzling newspaper column. Very scandalous and defiant of Serena considering the time and her status.

Great interview and I love the cover.. Love anything about the Scots and the Irish...I have not had an opportunity to read any of your books, but I have put this one of my list to purchase...

This one sounds great! You are a new to me author, which I love finding!!

You are also a new author for me. However, I love historical romance, so, I'm off to check out your site and your books.

I'm no historical expert, but the 1750's to 1890's novels I have read tend to call a "cougar" a High Flyer. She may also be called a "merry widow", but that does not specifically address an age disparity. Good luck with your research!