Q & A with Jayne Fresina...and a giveaway! 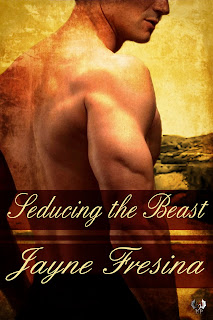 SEDUCING THE BEAST is an Elizabethan version of “Beauty and the Beast”. It’s a light-hearted romance of mistaken identities and about two stubborn people learning to cross the class divide. I think it’s a great love story. I had a lot of fun writing it.


Learn more about how to purchase it here.

It’s difficult to choose just one! I would have to say the point where Maddie (the heroine) finally manages to pierce the Beast’s hardened heart and makes him realize that he’s fallen for her. I won’t give too much away, but there is a small food fight involved, followed by a steamy love scene. Poor Maddie has been trying so hard, up to that point, to get through his arrogant mask. Finally the balance shifts in her favor.

I’ve always loved books and stories. I started writing them in my head when I was quite young, but I kept them to myself. I’m not sure I thought of becoming a published writer though until much later. I thought I was going to be a ballerina, then an actress! Becoming a writer wasn’t something I imagined until I was an adult and finally plucked up the courage to let someone read one of my stories.


4. Where do you get ideas for your stories?

Most of the time it just comes to me out of the blue. I could get inspired by a song, or something I’ve just watched on TV or read in a magazine. At night, I scribble ideas in a notebook by my bed – often characters will come first and I might write out a few scenes of dialogue before I actually build the story.

I’m constantly surprised whenever someone bothers to let me know how much they enjoyed my books. Complete strangers. I’m also shocked that I ever got up the courage to let strangers read my work! Never thought I would do that. Now, when they love it as much as I do, it’s a real thrill.

Another thing that has surprised me is the way ideas continue to flow for me. As soon as I’m done with one manuscript, I think I’m going to take a break, but then I can’t do it. The minute I sit down at the computer and open a new document, I’m off! If I can’t get to a computer I’m fidgety and restless. I wonder why and how my mind works this way. How does my head – which is not particularly clever - come up with these stories?? I can’t imagine what it must be like not to have ideas constantly crowding in, characters chattering away in your head all day. I’ve concluded it’s a kind of subtle madness.

My family has definitely influenced me more than anything. I believe I inherited my love of stories from my father. Growing up, he frequently entertained us with tales of his childhood in the country and his early years as a young firefighter. He had a talent for putting the pictures clearly in your head, even though you’d never met the people he was talking about. For a long time we tried to get him to write his stories down and finally, in his eighties, he sat down and started writing his memoirs. I’d love to see them in print one day. My sisters were eager readers and I picked up that habit from them. One of my sisters used to read “Agatha Christie” mysteries to me when I was sick in bed with mumps and then measles. Once I started writing, I got a few brave friends to read and review my work. The encouragement they gave me was invaluable too. I’m not sure that any one writer influenced me. I had some excellent English Literature teachers at school who nurtured my love of the classics – Chaucer, Shakespeare, Austen, Bronte, Hardy….etc.

They are very supportive, although I think they’re amused by it. I know my sisters have a hard time reading some of the racier scenes, knowing their little sister wrote them! I do try to warn them. I think they would rather I was writing children’s books!

I draw and paint, although I haven’t done any for a while – since the writing took off, I’ve been too busy with that. I used to get into the painting whenever I was taking a break from writing. I also like to cook, but I’m not very good. I have a hard time following a recipe and usually decide to start adding other ingredients. I made a vegetarian curry once for my mother-in-law, Kathy, and I don’t think she ever recovered.

After SEDUCING THE BEAST I have the follow-up coming out from Lyrical Press – ONCE A ROGUE – which is the story of Maddie’s little brother. I’m also working on the third book in that series, THE SAVAGE AND THE STIFF UPPER LIP, which is Maddie’s daughter’s story. That should be completed soon. I have a print version of my PRIVATE COLLECTION trilogy coming out from Evernight Publishing later this year. In spring 2012, my first Regency romance A FALLEN WOMAN will be released by Sourcebooks and I’m also currently working on the sequel to that. Lots going on!

Thanks for the interview!


BLURB for SEDUCING THE BEAST:


Hellbent on arranging a pardon for her exiled cousin, Madolyn Carver will stop at nothing to achieve her aim, even if it means seducing the mysterious Earl of Swafford. So what if he's known as "The Beast" and is immensely powerful? Plucky Maddie isn't frightened off easily.

Returned home after too long abroad, The Beast also has a mission. He must remove his younger brother and heir to the vast Swafford estate from the clutches of a most unsuitable woman. When a misunderstanding leads him to mistake Maddie for his brother's cunning mistress, he takes her captive under the guise of The Beast's manservant. Now she can longer be a threat to his misguided brother's future, or so he thinks. And surely, The Beast's infamous iron will can resist the charms of one particularly disobedient, witty, intriguingly stubborn young woman.

But there is a far greater danger. A deadly assassin has come to the Swafford estate, and The Beast's fear of falling in love might just be his downfall. Maddie, the woman he won't trust, is the one innocent soul who can save his life--and his heart.

Jayne has generously donated a copy of her ebook, LAST RAKE STANDING to one lucky reader. Please post comments and/or questions so that she can see and respond to them.
One lucky winner!!!

A food fight Jayne? I am so there. Can't wait to read this book! How do you pick names for the characters in your books? Thanks.

Ooh, Jayne, I'm new to your writing--very glad to "meet" you and add your latest to my TBB!

How wonderful that your family is supportive! Does your husband read your books?

Hi Christine - my characters names generally just come to me right away, as soon as I pictured how they look. I've only had one whose name I went back and forth over.
Hi Flchen - no my husband does not read my books, but he does like to tell everyone that he's the cover model.

The first line of your blurb is gold!

Jayne - you know I'm interested in the racy scenes! Do they come to you more from experience or from imagination? Or is that too personal?

Thanks Adonis! I like it too.
Anonymous - ha! You'll just have to be left wondering on that one.

Thanks Jayne, really interesting answers. We think you are destined for great things with your writing - keep it up!! How lucky you are to have such support. We bet they are very proud of you.
Do you include your friends and family traits in your characters?
Anne and Diana

Hi Anne and Diana - I do use little bits and pieces of some people I've known. Especially a few family members who have eccentric tendencies ;)

Beauty and the Beast is one of my favourite fairy tale. I like seeing the beast fall in love and the heroine seeing past his hard shell. I will be keeping an eye on Seducing the Beast. The food fight scene is intriguing.

Do you have a favourite story line to read and write about? I really enjoy stories about second chances and reunions.

Hi Na! I hope you get the chance to read Seducing the Beast. I know you'll enjoy it. Beauty and the Beast is one of my favourite fairy tales too and I love any new twist on the idea. I also love mistaken identity story lines and second chances!

You are a new-to-me author so I enjoyed reading about you and your book. Story sounds terrific and the cover is great too. Thanks for the giveaway.

Thanks Karen H! I love that cover too. He is perfect for Griff.

Have any of your friends/family claimed to recognize themselves in your stories? I know you sort of mix and match, but I imagine some special characteristics may be hard to hide :D

No, they say they can't see themselves in any of the characters, but I think most people would find it hard to recognize themselves unless they were really hit over the head with it - so to speak! Some people don't like to see reflections of themselves and some are too modest. But I have been wicked on a couple of occasions and taken characteristics from people who've really, really annoyed me! It's great revenge even if they'll never see themselves. LOL :))