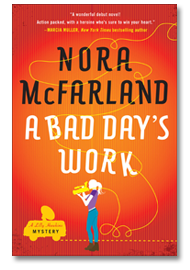 For fans of Lisa Lutz and Janet Evanovich, the debut in a new series, A Bad Day’s Work is a fast-paced and funny mystery starring a wonderfully flawed TV camerawoman named Lilly who is caught at the right place but definitely the wrong time.


Nothing seems to be going Lilly’s way. A TV news photographer at her hometown television station, she’s one of the hardest working “shooters” there, but her pit-bull personality and a series of unlucky blunders have put her job in jeopardy.


So when an urgent story breaks in the middle of the night, Lilly is determined to turn her bad luck around and get the respect she deserves. But the pressure is on—either she delivers amazing video—or she’s fired. After busting her butt and dodging the cops, Lilly has what could be the biggest scoop of her career—exclusive video of a murder scene. Or does she have it? Lilly is stunned when the tape played in front of the entire newsroom is nothing but dead air.


Soon she’s on the run from criminals and police, both of whom claim Lilly’s video is the key to solving the murder and think she pocketed the real tape. Can she escape her pursuers long enough to catch the killer, or will she end the day as the next victim?


Lilly’s bad day just keeps getting worse, but the one thing she knows for sure is that she’d like to live to see more of them . . .

The author has generously donated to Romance Reviews Today a few copies of her book, so we are giving one away here on the blog. To learn more about Nora, visit her website at http://www.noramcfarland.com/


Since the story is about "having a bad day" I thought the question for readers should be:


Tell us about a bad day you once had.
Post your response and I'll enter your name into the drawing.
US and Canada mailing addresses only.
Winner to be picked later this week.

I think one of the worst and say one of, because there have been many, was the day that my retina detached and I had to find someone to drive me to the Retina Specialist at his clinic, which was two hours away and I went into panic mode. I completly fell apart, but eventually one of my brothers came and drove me to tha appointment and then another one drove me back two days later foro the surgery. It took me awhile to recover my nervous system. But now at least I know what will happen to the other eye, when it happens and I have been told it will. But being prepared will go along way.

Let's just go with the most recent bad day...that would be yesterday. I ran out of a family dinner to get to the airport only to spend hours and hours waiting for my flight. Finally arrived around midnight. Ugh.

Nora's book sounds like fun. Thanks for the heads up! (Email in profile.)