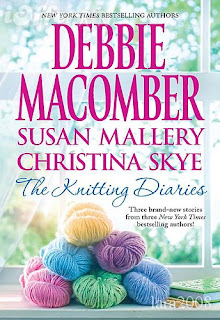 Anne Marie Roche has just signed the papers for her new home. She is
excited and a little nervous. Her adopted daughter, Ellen, is only ten
years old and has had enough upheaval in her life. Annie knew Ellen’s
grandmother, Dolores. When Dolores got sick, Anne stepped in as a foster
mother and after her death Anne adopted Ellen. Since that time, they have
lived in a tiny apartment over Anne’s bookstore. Forging a close relationship
they both have even learned how to knit. For fun they have written a list
of twenty wishes. But Ellen has added one more wish, that her mom will fall in
love with her dad, Tim. Will her twenty-first wish come true?

Tim, Ellen's birth father, wasn’t aware he was a father until after Ellen was
adopted. Once he meets Anne and establishes a relationship with his
daughter, sparks ignite. Ellen can’t help but notice they are attracted to
each other. Will Ellen get her wish? This may be a short story, but it is
excellent.

Robyn Mulligan gives up on her dream of becoming an actress on
Broadway. Broke and hungry, she returns home to Texas. Robyn plans
on helping her grandmother at her knitting store while Gran has knee
surgery. This will give her time to make some decisions about her
future.

Robyn is welcomed by Gran and her friends. All is well, but at the
knitting table she sees a handsome man who is giving her the evil eye.
Just who does he think he is? After attempting to talk to him, the chat
turns hostile as T.J. informs her that he knows she is not actress, but a fraud
lying to Gran and living off her money. Can Robyn change his mind?

T.J. has his own problems. He is recovering from a car accident that
took his wife and child. His guilt over surviving the accident haunts
him. Yet Robyn ignites a passion, and maybe it’s time TJ acts on it.

Coming Unraveled follows the knitting theme as the backdrop of the
story. However, readers quickly learn that both Robyn’s and TJ’s lives
have become unraveled. Robyn is like so many other young girls who left
home to become a star only to have their dreams fall short. The sex
sizzles between T.J. and Robyn. Secondary characters, Gran and her
friends, set the stage for a fun and lively read.

Caro McNeal is the ultimate knitter. That is, until she is hit by a car
and her arm and hand are severely injured. Facing a lengthy time in
recovery she goes home to home Summer Island in Oregon. Her Gran, Morgan McNeal,
is a well known artist and knows how important it is for Caro to be able to
knit, and welcomes her home.

Right now Caro can’t even hold on to a cup of tea. One afternoon she
drops the tea pot just as somebody knocks on the door. Caro doesn’t know
it but her life changes when she answers the door and meets Gage Grayson.
When their eyes meet, both feel a jolt all way the way to their toes.

Gage is preparing to return to Afghanistan from an emergency leave. He
has two more stops. He needs to pick up a painting for a friend and drop
his pets off. He knocks on the door and, for some reason, he and Caro
connect. After talking for only an hour and going on a picnic, Gage
leaves. After spending such a short time together, could they have fallen
in love?

Caro and Gage stay in contact, and when she learns there was a huge fire
fight, she knows Gage has been hurt. She won’t stop till she finds her
man.

This is a story of second chances. Caro is a lovely character.
She was devastated by her accident and frustrated that she couldn’t knit…or do
much of anything, in fact. Her depression is lifted after a picnic and
helping the local vet to look after Gage’s two animals.

Is there such a thing as love at first sight? I don’t know. I love the
ending, and I can’t tell you more. You will just have to read Return to Summer
Island.

THE KNITTING DIARIES is enjoyable, and I know readers will find them as
entertaining as I did. Enjoy.