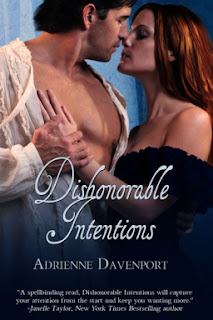 Caffey,
It's wonderful to meet you, thanks so much for the compliment! If you are interested, you can find Dishonorable Intentions at Amazon.com as well as Eternalpress.biz. Right now it is only available in ebook format but soon it will be available through Amazon.com in paperback as well. To answer your questions, at least four of the books I have lined up are related to this one. They all circle around Aiden and Jezebel's friends or relatives. I'm really looking forward to writing them but first I have a contemporary that needs finishing, Stranger by Morning. The last historical I read was November of the Heart by Lavyrle Spencer. It is one of my all time favorites but I lost my copy awhile back and barely found a new one. As for actually finding the time, :) I read late at night after my son goes to bed. That's my winding down time. If you have any other questions feel free to email me at adrienne_davenport@hotmail.com and I will get back to you asap. Thanks again for your interest.
Take care!
Adrienne Davenport