Guest Blogger: Kat Martin and Writing With a Partner 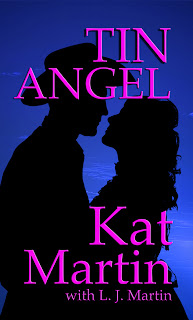 Something new is happening for me this month....the re-issue of an old western romance, one of my earliest novels, TIN ANGEL. What makes it different is that this is the only book my husband and I ever wrote together. To date, I’ve written fifty novels and my husband, L.J. Martin, (many of you know him as Larry) has written twenty five, but back in the late nineteen eighties, we were both writer-newbies.

When our agent suggested we co-write a novel, I was totally against it. I thought we would probably kill each other in the process. But Larry liked the idea. When he brought me the opening pages, I read them and couldn’t help laughing. Having never written anything humorous, I just had to try it, and so we agreed, and the idea for TIN ANGEL was born.

In the story, beautiful and strong-willed Jessica Taggart, a Boston-bred, finishing school girl, travels all the way to San Francisco to help manage the Tin Angel, the business she inherited from her father. There she meets ruggedly handsome and arrogant Jake Weston, her father’s partner and now Jessie’s. Jake is smug and domineering, a man hell-bent on proving Jessie can’t handle the job as his business partner. He’s determined to force her to sell him her share of the Tin Angel.

Not the restaurant Jessie believes when she leaves Boston, but the most notorious whore house on the Barbary Coast.

Once the story idea was conceived, we had to figure out how to work on it together. We decided to do it the easy way (or so it seemed at the time). Larry wrote the man’s part, I wrote the woman’s. What made the project so much fun was that aside from a rough outline of what the book was going to be about, neither of us knew from day to day what the other was going to write.

It was like writing a book while we were making up a book. It was a laugh a minute sometimes...like when we were a hundred pages into the book and I realized we had forgotten to bury Jessie’s father. I was going to write a quick funeral scene and insert it in the early part of the book...then I decided to see what Larry--by far the most fearless writer of the two of us--would write. He came up with a Chinese funeral that cracked me up and the Chinese community became a vital part of the story line.

We did have a few fights along the way, but mostly it was just so interesting to see what was going to happen next. Oddly, when two people write together, it doesn’t really sound like either one of them, but becomes a voice of its own. The book came out a little different from what I usually write, and since it’s a sexy romance, it’s way, way different from what my husband usually writes.

TIN ANGEL is only available in print from Amazon, but it has a great new cover, and it’s available in Kindle, Nook, and all other e-book formats.

So if you’re ready to read something just for fun, I hope you’ll give TIN ANGEL a try. And we both hope you enjoy it.

I'VE READ AND ENJOYED A LOT OF YOUR BOOKS KAT AND ONE BY YOUR HUSBAND LARRY. I LOOK FORWARD TO READING YOUR COLLABORATION TIN ANGEL.

Hi, Laurie! It was fun to write. hope you enjoy. kat