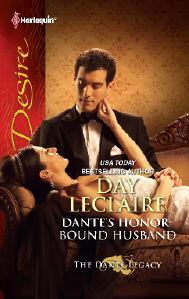 Eighteen months ago, Gianna Dante and Constantine Romano met at a Dante wedding reception. The attraction was mutual, and the first touch of their hands scared Gianna as much as it thrilled her. If legend held true, then the electrical charge she and Constantinefelt indicated the Dante Inferno had struck them and they were destined to be each other’s true love. But Constantineleft, telling Gianna he’d be back for her. In the intervening months, she grew fearful, not wanting to believe the truth of the legendary Inferno. So, she began dating another man and, when Constantineshowed up, she pushed him away.

But Constantineis persistent. What he feels for Gianna has nothing to do with the Inferno; rather he knows they belong together and he intends to make her his. Gianna is stubborn, but when an incident has her calling for help, it is Constantine who rushes to her side, and it is he who takes care of her. Before too long, it becomes clear to Gianna that she can no longer say no to Constantine. Yes, she’ll marry him. But is their connection due to the Inferno and will it indeed last, or is the power of the Inferno not true?

In the previous seven stories in The Dante Legacy series, each one has featured a male Dante. DANTE’S HONOR-BOUND HUSBAND has the only female up to this point. Gianna might be the pampered Dante heiress, but she isn’t spoiled and she has a mind of her own. Her fears about her future happiness and the potential effect of the Inferno have her scared, and her first reaction is to turn away from Constantine, despite the powerful attraction they have. The man she is currently dating, David, turns out to be a louse, and he has a past with Constantine. What a tangled coincidence. Why did Constantine leave Gianna just as they discovered each other? He didn’t want to court her as a man without monetary substance and worked hard until he was ready to claim Gianna as his. The passion and desire between Gianna and Constantine will leave readers with no doubt that these two belong together. They may resist the truth of the Inferno, but they can’t deny the powerful attraction they feel for each other. Will this lead to future happiness together?

Day Leclaire has once again provided readers with a passion filled tale revolving around the Dante family. We get caught up on the men of the family who make us realize (as a woman) how lucky the ladies are who have captured their hearts. Gianna and Constantine continue that tradition. If you haven’t read Ms. Leclaire, then I strongly suggest you do and start your reading journey with The Dante Legacy books. You won’t be sorry.