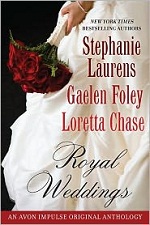 After the death of her fiancé on the battlefield of Waterloo, Lady Margaret Dawlish puts her knowledge of society protocol to good use by planning weddings for her family and friends. She is currently arranging a wedding between Viscount de Rocher, a prince of the royal house of France, and a friend, Juliette. She is surprised to see that Robert’s cousin, the Duc de Perigord, better known to her as Gaston Devilliers, is to be the best man (head groomsman). They had a strong attraction to each other when they met several years ago when she was affianced to another man. Gaston knows what he wants and carefully plans his strategy, but will Meg want to give up her independence?

Eleanor Montford, the Countess of Archer, is unfashionably in love with her husband, James Augustus Montford, Colonel Lord Archer. She doesn’t let him know the overwhelming passion she feels for him… and jealousy. She thinks he is having an affair because he has been away from home so much of late. Archer loves his wife and doesn’t understand why she has been so cold and distant lately. Is there any chance to sustain this marriage? Everything comes to a head at the royal wedding between Princess Charlotte and her true love, Leopold.

After receiving a letter breaking their betrothal, Hugh Fitzwalter, the third Marquess of Rothwick, arrives in the pouring rain to confront Barbara Findley. He is very upset—he desperately needs the money that she would bring to the marriage to repair his estate and help all who depend on him. Because of the money, he had been afraid he would have to wed an ugly crone, but instead found a woman who is beautiful and full of life. Barbara fell in love with Hugh at first sight, but now has second thoughts about entering a loveless marriage. The day after tomorrow, Queen Victoria will wed Prince Albert.

Three delightful romantic novellas that readers are sure to enjoy with the backdrop of different ROYAL WEDDINGS of the 1800’s. With these three excellent authors, you know all the stories will be enjoyable reads. My only complaint is I would have liked the stories to be longer and more detailed because they are so good. They are all beautifully written with wonderful characters and appropriate for the season of Kate Middleton and Prince William’s nuptials. I highly recommend this charming anthology, available at online bookstores or through www.avonromance.com .

I so need to get this one! Were they like 3 novellas or short stories?