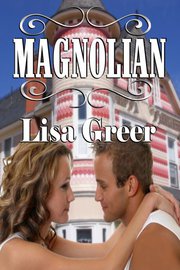 My novel is a gothic romance novel titled 'Magnolian.' It was released last month (April 2011) in e-book format and will be released in September 2011 in print format from Siren Book-Strand. In the novel, the heroine, Lillian Mullins, goes South after her father's death to stay with her Grandmother Stark at Magnolian, the ancestral home of her mother's family. Soon, nightmares, ghosts, and murder threaten to derail her attempt to get a life. After she finds her mother's old journal at Magnolian and learns a shocking secret, Lillian resolves to find out what happened over thirty years ago there to her mother's African American lover, Samson Jones. Two men compete for her love and aid her in solving the mystery from the past that threatens her life in the present: her enigmatic distant cousin Willoughby Tate who is running his father's gubernatorial campaign and the sensitive pianist, Donovan Ross, whom she is just getting to know. As with many gothic
romance novels, the novel has a twist or two to keep readers guessing.

My favorite scene is a Thanksgiving dinner scene where both of the men who are after Lillian's heart-- Donovan and Willoughby-- show up at the feast. When Lillian leaves the table for a few minutes, the determined Willoughby goes after her, and that leads to a sexy and funny scene.

I have wanted to write since reading my first Nancy Drew novels probably right after Kindergarten.

My stories come from a variety of places. Setting is important to me; place has a major role. Once I decide on the setting for a novel, the writing unfolds easily. I have lived in several places over the last ten years: Texas, Alabama, Mississippi, Pennsylvania, and Canada, and I have traveled to many others. So far, three of these settings have been integral in my novels. My upbringing and life in a small town in Alabama played a central role in how I wrote 'Magnolian.' I have always hated reading about generic settings or places the novelist obviously has not spent time in or lived in. As for the characters and plots of my novels, I get ideas from the news or from something someone says. In my current work in progress, one of the key elements came from an offhand comment a good friend made. I always have my eyes and ears open for ideas.

I would say my interesting quirk is that I don't plan my novels meticulously. I get a general idea of the plot and where I want my heroine and hero to end up, and I start writing. As the novel unfolds, I take time to sketch out scenes and what I want to happen next.

I was surprised to find out that my muse tends to visit me around 1 a.m. most mornings; I have learned to jot her ideas down in a little note pad by my bed or get up for a few minutes and write them down in a file on my computer. These ideas are some of the best ones I get, and they come a couple times a week.

The author who has influenced me most is Barbara Mertz, especially in her gothic romance novels penned under the name Barbara Michaels. I was told recently that my style is a bit like hers, and that was a huge compliment to me. Others like Daphne DuMaurier, Phyllis A. Whitney, and Anya Seton have also shaped the type of novels I like to read and write about. Next, my husband directly influenced my first novel with his question: "When are you going to write a novel?" He asked me that, and I started it the next day. I realized he was right; it was time. My best friend has also been a huge support for me; she encouraged me to follow my dreams and had a hand in heping me with some technical stuff on my first blog. Finally, my blog readers have influenced me greatly. I founded the Gothicked Blog some months ago before I started writing. I review gothic novels there, especially gothic romance novels, and the comments and
insights of readers helped me absorb myself in that world fully. Some of my blog readers and commenters there have also been beta readers for my novels; I appreciate that tremendously because they have years of reading this genre of work under their belts.

My husband is my rock and main support. I have to say, though, that he was astonished at how quickly I completed my first novel and was dumbfounded to learn I had begun another one a couple months ago. My daughter knows when I'm writing and is good about letting me have a chunk of time to do that if an idea has come to me at the moment. Overall, though, I try to write when she is at school or in bed. She is excited about my debut novel.

I am submitting my second novel now to agents and writing my third novel. The second novel is a gothic romance novel set in Brownsville where I currently live, and the other novel is a sequel to 'Magnolian.'

I love to hear from readers! They can find me on Facebook (Lisa Gay Greer), Goodreads, or on my blogs:

http://lisagreer.blogspot.com/ -- My author's site that has contests, articles, polls, and more.

http://gothicked.blogspot.com/ -- my gothic novels review blog that has reviews, contests, and more.

Thanks so much for having me, Patti!