This story was so much fun to write. It has big bad warriors, castles, demons, and swords. The foundation for the story is Michael the Archangel has a secret clan of warriors. Faelan is the mightiest warrior of his time, but he gets trapped in a time vault while trying to save the world from a vile demon. Bree is a historian who feels more like Indiana Jones. When she finds a treasure map in the old house she’s inherited, she’s expecting anything but the Scottish warrior who comes leaping out of his tomb at her.


Click here to read the excerpt for Awaken the Highland Warrior
The attraction between Faelan and Bree is instantaneous, and there is a good reason for that, but they also have to deal with a lot of frustration because they’re from such different times. Faelan can’t fathom a female being so bold and rash. The woman attracts danger like a bloody magnet. And she won’t let him protect her; he, a renowned warrior since before she was born. If he could drive that bloody thing she called a car, he’d toss her over his shoulder and get her away from her house before the demon who locked him up comes looking for him.

Bree feels something for Faelan that goes way beyond attraction, frighteningly so, but on the other hand she’s ready to stick him back in the time vault if he doesn’t stop with this over protective nonsense. It’s not the 19th century, for God’s sake, and he’s treating her like she’s helpless. Women are strong and independent. She’s tempted to drop him off at a homeless shelter but with that appetite (ALL his appetites are raging) he’d starve to death. And after she finds out what’s on the trail of this big, bad warrior, she’s glad to have all that muscle around for protection. And she’d give her entire Civil War collection to get her hands on that talisman hanging around his neck.

There are so many scenes I love; battles in chapels, mishaps in lingerie stores, botched rescues, but probably the opening scene, where she finds him, would have to be my favorite. 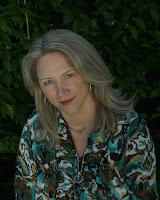 I didn’t start writing until about 5 ½ years ago. I had been reading like crazy and I just knew I could do this. Of course, I had no idea how difficult it really is, or how hard it is to get published. By the time I realized that, it was too late to back out.

The idea for Awaken the Highland Warrior came from a dream. The demon part did anyway. Not a nice dream, I might add. I had been toying with the idea of a warrior who’d been found buried but not dead, so I used the ideas together.

I have lots of quirks. I’m not sure about writing. I don’t know if it’s really a quirk, but I love brainstorming. It’s my favorite part of writing. I like to lie in bed with my eyes closed and think about the story, playing what if in my mind. Also, my fabulous critique partner and I do brainstorming sessions at Cracker Barrel or a Mexican restaurant every week or so. Cracker Barrel has the best pancakes. That’s a delicious quirk.

I’ve always known that I was a daydreamer, but I didn’t know how creative I was. My plots are big and layered with secrets and surprises.

I decided to write and dove in head first. No particular authors influenced me. I just loved reading and wanted to be able to create something like that. I found out that it wasn’t as easy as I had thought but there were so many authors who offered tips and their own experiences. My first instructor was Leigh Michaels, a great writer. She helped me when I was very new. Margie Lawson was wonderful in helping me hone the craft. I do have favorite authors. Diana Gabaldon, who I just discovered about a year ago. Love her. And Kristan Higgins. Anything she writes is good. Janet Evanovich, Elizabeth Peters, Harlan Coben. And I adore Jeri Westerson’s Crispin Guest series. Oh there are so many.

They’re very supportive and very proud. My daughter loves to tell people her mother is an author. My husband is only 37 but he’s planning his retirement to a large ranch since he’s sure I’m going to be rich and famous. He’s promised to take care of the kids and the house. Ha! I told him not to hold his breath.

I love reading, shopping (my bargains are my treasure hunts), diamonds, mirrors (artwork) and trees. Of course, I love spending time with my family.

EMBRACE THE HIGHLAND WARRIOR. When the powerful demon that left Shay for dead discovers her empty grave, he comes seeking retribution, believing she possesses an ancient book he has sought for centuries. Knowing she can’t fight the demon alone, Shay returns to her clan and the Scottish Warrior who betrayed her…the only man she’s ever loved, where she discovers that betrayal isn’t always what it seems. Sometimes it’s far worse.

UNLEASH THE HIGHLAND WARRIOR. A talisman belonging to Tavis Connor’s brother is the only weapon powerful enough to kill the demon hell-bent on stealing the clan’s Book of Battles so he can destroy the world. But the talisman has been locked in a time vault with Tavis’s brother and won’t open for 150 years. In desperation, the Scottish warrior breaks the clan’s sacred rules and uses another time vault to travel forward so he can protect the book and rescue his brother, or if he’s dead, finish his quest. But when Tavis finally wakes in modern-day New York, he discovers he’s the one in need of help. Anna MacKinley has been searching for her clan’s Book of Battles which has been missing for 150 years, but instead she finds a warrior with no memories who claims he’s come to save the world.

Anita Clenney grew up an avid reader, devouring Nancy Drew and Hardy Boys books before moving on to mysteries and romance. After working as a secretary, a Realtor, teacher’s assistant, booking agent for Aztec Fire Dancers, and a brief stint in a pickle factory (picture Lucy and Ethel--lasted half a day)…she realized she'd missed the fork in the road that led to her destiny. Now she spends her days writing mysteries and paranormal romantic suspense  about Secret Warriors, Ancient Evil and Destined Love. Anita lives in suburban Virginia, outside Washington DC, with her husband and two kids. You can learn more about her writing at www.anitaclenney.com
at May 25, 2011

Great interview! I love mirrors and tree to and good smellin candles :D

Terrific interview, Anita! Looking forward to reading this one!

Great interview, Anita. You are going to the top of the lists with this one. I can feel it in my southern bones!

Nice interview Anita - I like the sound of this book! As a side note, uh, kinda like to hear a little about those Aztec Fire Dancers :-D

Thanks for coming by Cheryl!

Carolyn, I hope those Southern bones are right. :)

Cybercliper, thank! About those Aztec Dancers...I could tell some interesting stories, but I'd better not. :)

Thanks for having me here! I enjoyed the comments from the group. I'm off to Martha's Vineyard for a booksigning, author/agent panel, and a honeymoon that's 14 years overdue.