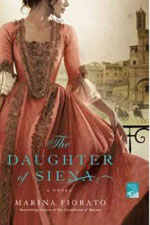 The Palio has a long tradition in Siena. A wild horserace through the center of the city that has brought on severe rivalries between the districts within Siena, the Palio can be deadly serious. There are two races, a month apart, and the riders draw different horses to keep the competition fair.

Strikingly beautiful Pia Tolomei of the Civetta, or Owelet, district has suddenly been promised to the heir of a rival area, Vincenzo Caprimulgo of the Eagle contrada. Stunned by this news, Pia is well aware of Vincenzo’s reputation as being vicious and cruel. It is obvious to Pia that her father and Vincenzo’s have made an agreement of some kind, and Vincenzo’s arrival and implied threats to her leave her frozen in fear. She is to be married the next day after the first Palio race, and her only hope is that her future husband dies during the event. When that does happen, Pia is horrified, but then further so when she is immediately handed over to Vincenzo’s younger brother, Nello, who could be even worse than his sibling.

During the Palio, young Riccardo Bruni, who rides for his district and is considered the one to beat, sees another rider using a whip to blind Vincenzo, who is thrown from his horse and lies dying. Riccardo stops to help him, but knows immediately that there is no way to stop the bleeding. Later he is summoned to the Eagle’s lair where Vincenzo’s father thanks him for helping. But then Nello takes Riccardo to the dungeons where the rider who hit Vincenzo has been tortured and killed. Forced to carry the young man’s body to the center of Siena, Riccardo knows that he has been dragged into a dangerous game.

Duchess Violante de’ Medici of Siena is a lonely, sad woman who lost her twin boys after they were born and her husband to syphilis years later. She rules the city, but it seems in name only as the district leaders control everyday life. When she becomes aware of the death of Vincenzo, and then another young man’s life is taken in revenge, Violante comes out of her shell to prevent her adopted city from being torn apart.

THE DAUGHTER OF SIENA is a fascinating account of a real life race, as well as a story of behind-the-scenes events set during a time when city-states were ruled by one, but controlled by many families. The three main characters, Pia, Riccardo, and Violante, as well as a young orphan called Zebra, find themselves working together to save Siena from a consortium of these families who want to depose the duchess and control the city outright. How can these people achieve this seemingly impossible goal? That is what is magnificently detailed in this extraordinary novel. All of the characters are well rounded, historical detail brings Siena to life before the readers’ eyes, and it all comes together in this beautifully written tale.

A truly wonderful story, THE DAUGHTER OF SIENA is romantic, artistic, and filled with twists and turns. The ending is extremely satisfactory, but will surprise one and all. A Perfect 10 in every way.