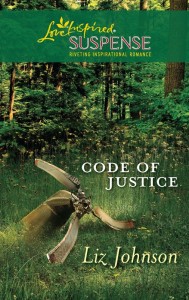 
Code of Justice is my third book featuring Portland FBI agents and tells the story of agent Heather Sloan, whose sister Kit is killed in a helicopter crash. Kit’s last words leave Heather doubting whether the crash was really an accident, and when someone tries to kill her while she’s still recovering in the hospital, Heather knows she’s in trouble. Enter Sheriff’s Deputy Jeremy Latham, who’s assigned to investigate the crash. As the two work together to find the person responsible, they learn to trust and care for each other. Heather will do anything to find her sister’s killer, but could her code of justice cost her the chance to win Jeremy’s love.

One of my favorite scenes is the opening one. Heather and Kit begin the story knowing that something is terribly wrong as the sightseeing helicopter they’re in begins to plummet. It stole my breath as I wrote it and even made me cry as Heather is helpless in the face of her sister’s injuries. It gets the story off to an intense start, which is one of my favorite parts about romantic suspense novels.


I’ve been writing stories since I was 7, including probably the worst novel known to humankind, which I completed when I was 13 or 14. Writing was always a favorite activity, and I knew that I wanted it to be a big part of my career, which is why I majored in public relations in college. After college, I took the Christian Writers Guild two-year apprentice course. Even after completing that, I viewed publishing as more of a dream and less of a goal. It wasn’t until I was working in the Christian publishing industry that a friend of mine really encouraged me to finish a story that I’d been working on, and after many long months that turned into my first published novel, The Kidnapping of Kenzie Thorn.


The information for my stories comes from lots of research about the places where my stories take place and the jobs that my characters do. I tend to have three or four websites open at any given time while I’m writing. For this book, I was constantly looking up things about helicopters and small planes. But the ideas … well, I’m not sure where they come from, but there’s a wealth of them. Usually, as I’m brainstorming a book idea, I bounce the basics off of a writing buddy, who usually helps me fill out the story a bit more. And before I know it, I have a full-fledged outline.


I’d have to say that it’s that I go in spurts as to where I write. I’ll go for weeks refusing to write anywhere but at my dining room table. And then one day I’ll decide it’s warmer in my bedroom, so I’ll prop myself against a bunch of pillows and write on my bed and only there for about month. And then I’ll move to my couch or decide that Panera is the only place to get real writing done.


I’m perpetually surprised at how difficult it is to write a book. It requires the same amount of discipline every time. It requires getting my seat in a chair and writing. That’s never been easy for me, but discipline is a muscle that I have to keep working and keep growing, practicing over and over again.

Two names immediately come to mind. Kelly Blewett and Jessica Barnes. Kelly and I worked in publicity together years ago, and she’s the one who helped me set up a calendar for finishing my first book. She became my accountability partner, asking me every day if I’d written the night before. You can’t buy that kind of encouragement. And Jessica became my Monday-night writing buddy when I moved to Colorado Springs. I bounced all sorts of ideas off of her, and she brilliantly helped keep me on track. I doubt I’d be published now without these two dear friends. There are also several families at my home church in Arizona who have been really supportive, reading first manuscripts and throwing me booksignings now that my books have released. Judy Dyson, Ann Autrey, and the Hirte family have all been incredibly supportive.


When I sold my first book, I called to tell my brother and he asked if that meant I was quitting my job and moving back to Arizona to be near the rest of the family. I laughed and said I was going to have to sell a whole lot more than one book to be able to quit my day job. But I think overall they’re pretty proud of me. I send them early manuscripts, which they usually fight over who gets to read first. My mom has gone on every major research trip with me for books that I’ve published as well as ones that have yet to find a publisher. They celebrate the successes with me and help me find perspective in the middle of rejection.


I love watching live theater and exploring the music scene in Nashville. I’m also the aunt of five of the cutest kids ever, so I love to dote on them, traveling to Arizona every chance I get.

My next release is called A Star in the Night. It’s a novella, which is part of A Log Cabin Christmas Collection, releasing from Barbour in September. It’s my first historical (if you don’t count that really bad novel I wrote as a teenager), and I’m thrilled to be among some amazing writers in this collection. Beyond that I’m working on more romantic suspense as well as a full-length contemporary romance, which I’m hoping will find the right publisher soon.

I post about my misadventures in writing and life in general on my blog at http://www.lizjohnsonbooks.com/  I also tweet at www.twitter.com/lizjohnsonbooks .

Thanks again for having me! It was such a pleasure.