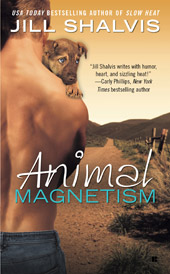 Brady Miller has lived his life with nothing to tie him down and no home base. So he’s not completely thrilled to be in Sunshine, thanks to the nagging of his foster brothers. When their foster father died leaving everything to the three of them, Brady signed everything over to Dell and Adam; he hadn’t expected them to make him a part of their veterinary center. His visit doesn’t get off to a very good start when his truck is rear-ended at a convenience store. Other than an immediate attraction, Brady isn’t sure what to think of the woman driving the jeep, or her menagerie of animals.

Lilah Young’s morning has not been a very good one. Falling asleep while studying the night before means that she woke up in the middle of her books and homework, running late for the pick-ups she needs to do for the kennel she runs, and not quite looking her best. Hitting another vehicle is bad enough, but to add insult to injury, Lilah doesn’t have her insurance card, her car won’t restart, and the person whose car she hit is a serious hottie. Learning later that he’s the missing brother of her two best friends only makes it worse—or better, since she works so closely with Dell and Adam, she’ll get to see a lot of Brady. For a woman with too few dates and two overly protective friends, the chance to see if she can get something going with Brady is hard to resist. She knows he’s only in town for a month, but Lilah knows that she can have a lot of fun in a month. Now she just has to make sure that her heart doesn’t get involved.

ANIMAL MAGNETISM is a fun, sweet, and sexy story. Brady grew up in foster homes, moved on to the army, and now is a pilot-for-hire, willing to fly into the most dangerous of situations. Lilah’s first impression of him is of a hard, lone-wolf kind of guy, but she quickly sees the humor and protectiveness behind his outer shell. Though she grew up with her grandmother, Lilah’s own parents abandoned her, and while she’s a giving, loving person who’s always helping others, she won’t accept help for herself. Lilah and Brady have much in common beyond the mutual attraction, and it’s enjoyable to watch them banter back and forth as they get to know one another.

Dell, Adam, and their receptionist, Jade, are the main secondary characters of the story, but Sunshine is a small town, so there are plenty of people to round out the cast. Almost stealing the show throughout the book is Twinkles, the not-very-manly small dog that adopts Brady, then proceeds to drive him crazy. From beginning to end, ANIMAL MAGNETISM is a captivating story that will have you laughing out loud, rooting for a happy ending for Lilah and Brady, and hoping that this won’t be your last visit to Sunshine.