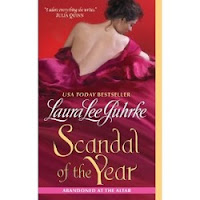 In 1903, Julia, Lady Yardley, was able to obtain a divorce from the husband she hated when he named Aidan Carr, Duke of Trathem, as corespondent in the adultery case. Aiden lost his second fiancée over the humiliating incident. He knows he was manipulated by Julia and dislikes her intensely, although he has to admire her beauty and fights his attraction to her.

Now, in 1904, Aidan will try again to find a wife. He is thirty years old and is ready to marry and have children. He is a steady, serious man, but his first fiancée broke their engagement to marry her childhood sweetheart (see WEDDING OF THE SEASON, January 2011), and his second fiancée broke off with him after his drunken indiscretion with Julia. The first ball he attends, he runs across Julia, whom he tries to ignore. She sincerely likes Aidan, and although she is sorry to have caused him so much distress, she is overjoyed to have escaped her marriage from the despicable Lord Yardley. She is not concerned that it ruined her reputation, and tends to be somewhat unconventional, but she does worry about hurting her family. Aidan scoffs at her advice regarding possible brides. Even though he is disdainful of her, as hard as he tries, he can’t lose the strong attraction he feels when he sees or thinks of her. It has been this way from the first time he met her when she was seventeen. Her beauty and wildness answers something in him.

Julia is deep in debt. Although her cousin, Paul, is giving her a generous allowance, her ex-husband hadn’t paid her expenses and she had lived an extravagant life style. Having no idea what she can do to earn money to pay the moneylenders, and knowing Aidan’s business acumen, she goes to him hoping he will have a suggestion for her. He hires her as his social secretary to help him find a wife.

Another wonderful story by the talented Laura Lee Guhrke, SCANDAL OF THE YEAR tells Julia’s story. She has always been a free-thinking young woman, but she hides her vulnerability behind smart remarks and pretense. She had no choice but to marry her husband who brought her nothing but fear and unhappiness. Although she has adopted a devil may care attitude, she now hopes to get her life back on track by paying her bills and working with Aidan. Will Aidan finally meet the real Julia? It takes them a while to realize they complement each other.

Excellent characterization, wonderful dialogue, good pacing, and a mesmerizing storyline are the trademarks of Ms. Guhrke. Abandoned at the Altar is a terrific series. WEDDING OF THE SEASON and SCANDAL OF THE YEAR are books that will go on your keeper shelves for a second and third read. Warning: once started, you won’t be able to put these terrific stories down until you read the last page (and then you will be looking for more). SCANDAL OF THE YEAR is a Perfect 10.

Oh Wow, Mary, this sounds so fab! I heard all great things about both these books out so far! Awesome review!