Guest Blogger: Kat Martin asks...HOW DO I CHANGE TO A DIFFERENT GENRE? 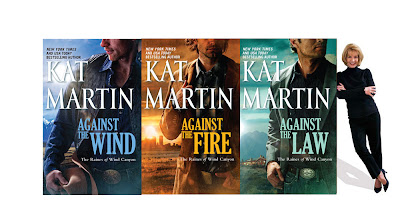 One of the questions people have been asking me lately is how I managed to change from writing Historical novels to writing Contemporary Romantic Suspense.


I have to say it’s never easy to do. Publishers are not risk takers. They always want to take the safe road. It’s easier for them to sell the same kind of book by an author over and over. The writer’s audience is building, sales are improving. They don’t want to rock the boat. And I don’t really blame them.

Fortunately, by the time I came up with the concept for the Raines Brothers Trilogy, Jackson, Gabe, and Devlin in AGAINST THE WIND, AGAINST THE FIRE, and AGAINST THE LAW, I had already written three contemporary romantic suspense novels for Mira, my publisher, and seven for a previous publisher. The sales were respectable, which helped me convince them.

As I made the change, one of the things I really tried to do was to maintain the style of writing I was known for: fast-paced, high-action, sexy, romantic books. I also wanted to keep the emotion in my stories, something I hope to make people feel when they’re reading one of my books.

I tried to make sure my basic style of writing didn’t change, even though the novels are set in a modern world instead of Victorian or Regency England.

In AGAINST THE LAW, the third in the trilogy, Dev Raines is “mostly retired.” The youngest of the brothers, Dev is also the wildest, an ex-Army Ranger and a dedicated bachelor. But when Lark Delaney walks into his life, asking for his help in finding her dead sister’s lost little girl, Dev discovers a side of himself he hadn’t known.

Or had once known years ago, before his heart was broken.

Dev and Lark set out on what appears to be a simple matter of locating an adopted child and wind up heading into a dangerous adventure. It’s a journey that opens Dev’s heart and eventually teaches him to love.

These three books were so much fun to write! I loved all three of brothers and the solid family bond they shared. Being Western men raised in Wyoming, they had strong moral values: courage, honesty, loyalty. They were intelligent and caring and when they fell in love it was forever.

@*@*@*@*@
Kat is giving away to one lucky winner an autographed copy of AGAINST THE WIND.
Have questions or a comment for Kat? Post away and we'll announce a winner sometime after Monday.
Good luck!!!
at February 21, 2011

Wow, thanks for the interview. To be honest, I haven't known you, Kat, but I would like to read your books.
I write short novels, but I keep them myself. I usually wrote contemporary stories, but sometimes I try to write historical stories, too - and there's always a difference between the two kind of stories. All of my respect is you if you really could save your writing style ;)

Hello Kat!
Are there other genres you want to tackle? What is your favorite genre to read? Thanks for the great post and for the awesome giveaway!

Kat, I've read your historicals for years and adored them. Can't wait to read this series! From our chats we've had, this sounds like a keeper to me ;)

I am such a big fan of your books! I have a few at home on my "favorites" shelf :)

I think you have been very successful at changing genres. I know when I pick up any book by Kat Martin it will be good.
csdsksds[at]gmail[dot]com

Hi, Guys! great comments...
Mikko-Mano, maybe you should think about publishing your short stories...lots of opportunity on the Internet

Stacie-- For Christmas, I wrote a straight contempory, The Christmas Clock. It was out in hardcover, then paperback for Christmas this year. In April, the second book set in the same little Michigan town of Dreyerville will be out, a little gift-sized Hardcover called A Song for My Mother. So you see, I've been trying some new things and enjoying the challenge. kat

Mo, Stephanie, and Runner-- hope you like the new books--they are some of my all time favorites. kat

Chey-- It's one of my all time favorites so I'm really hoping readers will like it. kat

Can't wait to try this series! I've read some of your other books so I look forward to reading

Izzy--I've loved writing these guys, they are just the best! Hope you enjoy, kat

Don't enter me in the contest.
I have read the first two books and they were awesome!

Estella-- so glad you enjoyed! hope you like the new one! best, kat

Congrats on the release! I only recently discovered your books but I love the sound of them and am looking forward to reading them.

I haven't read this series yet so I am excited to!

Donna and Seo-- hope you will give my guys a try. they are such hunks and they were so much fun to write. Hope you enjoy! best, kat

Congrats on your new release. The trilogy sounds great!

thanks, Mariee-- hope you like the books! best, kat

I like it when authors change things up a bit by trying new genres. Thanks for visiting, Kat.

LSU Its been a great place to blog. Wonderful comments. hope you like the new books! best, kat

I love reading your books and thanks for a chance to win a copy of one of your latest!

Thanks again for the great giveaway!