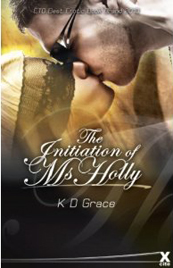 My erotic romance, The Initiation of Ms Holly, is a modern retelling of the Psyche and Eros myth. I was one of those people trapped in a train in the Eurostar tunnel two years ago. With nothing to do but sit and wait in the pitch black, my imagination went wild. A sexy encounter in a dark train with a man whose face you never see is an exciting fantasy, but what would happen if you were never allowed to see your lover’s face? What if all the lust, all the emotions, all the desire that accompanies new love were there in spades, but you couldn’t do anything about it? What if, like Psyche, the only way to see your lover’s face and get the rest of the package is to fulfill certain obligations, certain tasks that would stand you in good stead with his powerful friends.

Journalist Rita Holly never dreamed sex with the mysterious Edward in the dark of a malfunctioning train would lead to a blindfolded, champagne-drenched tango, a spanking by a butch waitress, and an offer of initiation into the exclusive mysteries of The Mount. Desperate to save her threatened job, she agrees to the initiation, scheming secretly to write an inside, career-making exposé on the club. But as she delves deeper into the intrigue of The Mount and gets to know and care about its members, being able to remove Edward’s mask becomes more than just a reward for a mission accomplished, and she soon discovers that her heart may have plans of its own.


Wow! Tough choice. There’s a very hot scene on a Harley that I like a lot. There’s a very romantic scene in Edward’s study where he catches Rita snooping around. But my favorite is a scene that involves a frustrated Edward commiserating with his best friend, Alex, about not being able to make love to Rita during her initiation. The two very open minded blokes come up with a fabulous gift for Rita, a DVD of one of her fantasies involving the two of them. I think it’s a very tender scene while at the same time sexy and funny, especially when the DVD ends up in the hands of Rita’s friend, Kate.


I’ve never not wanted to be a writer. Before I could write, I told stories and drew lovely little stick figures to illustrate them. Then when I actually learned how to write, no blank sheet of paper was safe.


As I mentioned earlier, this story came in part from being trapped in a train and in part from one of my favorite Greek myths. Sometimes story ideas come from dreams or just viewing everyday occurrences from a different angle. I ‘walk’ most of my stories. I’ve gone on long walks and come back with complete stories in my head. My creativity is stronger when I’m walking or vegetable gardening.

Probably that I walk my stories, or dig them, or weed them. I have occasionally been known to iron a story, but it’s not my preferred method.


I’m surprised how real the characters become to me, how much I feel what they feel, and how much they surprise me. They often do things I never intended them to do, and there’s no arguing with them because they’re always right.


As I said, I love to walk. There are so many lovely national trails here in Britain, and walking is such a national pastime that I can literally step outside my door and walk for miles in spectacular scenery. I’m also an obsessive veg gardener. Every year the veg patch gets bigger and the back lawn gets smaller, but we can usually go from May to October without needing to buy veg at the supermarket. Also my husband and I dabble in Chinese martial arts. I feed most of the birds in the county at the feeders in my back garden. And, at the moment I’m trying to teach myself to play piano. Yes, I know. Don’t laugh

My website, K D Grace, A Hopeful Romantic is kdgrace.co.uk You can find me there ruminating about something romantic or sexy or just fun. You’ll also find more information about The Initiation of Ms Holly and all of my works, and where to buy them.
at January 19, 2011

Great interview. I like what you said about getting plots while gardening or walking. I think a lot of my ideas come while I'm doing some sort of other activity. Maybe the exercise stimulates the brain somehow? Certainly just staring at a computer screen doesn't bring the good stuff.

Great to meet you KD! I've learned most about mythology and legends through the romances I read! Even with this being a modern story of it, its neat to have a twist in it that way. Definitely going to check this out. You said you had a fantasy in the works, will this too be a sizzling romance?

By the way, I couldn't get the link to your site to work. Maybe something on my side or your site down? I shall try again tmr!