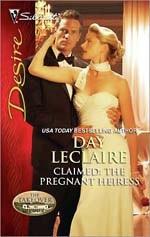 Two months ago in New York City, Chase Larson had a blistering night of passion with a woman he only knew by her first name, Emma. He has been unable to locate her again until the night he attends a party with his stepbrother, Rafe, and discovers that she is Emma Worth, the daughter of the man whose company his brother is about to take over. Chase wants to reconnect with Emma, but she resists. However, he persuades her to go for round two, and their night of passion soon turns into a morning of revelation: Emma is pregnant.

Emma never forgot Chase from their passionate night in New York, but she can’t get involved with any man right now. Her focus is on making sure the impending sale of her father’s company doesn’t displace the townspeople of Vista del Mar. Rafe’s takeover is bordering on hostile, and Chase, as his brother, is part of it and immediately makes him suspect to Emma. An unplanned pregnancy puts her plans to keep Chase at bay on the backburner, as he’s determined they’ll marry. Can a marriage built on distrust and unexpected consequences have any chance of succeeding?

In this first tale in The Takeover series from Silhouette Desire, we are introduced to Chase and Emma. Both had miserable childhoods revolving around dominant, wealthy fathers. Chase has distanced himself from his father and works with his stepbrother, Rafe. Emma is still living in her father’s mansion, but feels stifled by the expectations of being the “Worth Princess” and has focused her energy on charity. Their coming together was purely accidental, but the memory of their night of passion has lingered on for both. The knowledge that Chase is part of “the enemy camp” knocks her for a loop. Learning she’s pregnant with his child throws them both off balance, but quickly Chase makes it clear they must marry. She’s not sure she wants to. It’s going to take every ounce of his persuasion to convince her.

Right from the start, Emma and Chase have a lively banter as they find out their connection to each other. The pregnancy discovery scene is both poignant and funny, and to me is the best part of CLAIMED: THE PREGNANT HEIRESS. This scene alone makes Emma and Chase very real characters that readers will relate to and fall in love with. Their chemistry is obvious, and their hurdles in life have them soon working together to try and make things right between them and the people they care for. There is also an ongoing “saga” with their cell phone ringtones that will bring smiles to many readers. Day Leclaire has done a lot with CLAIMED: THE PREGNANT HEIRESS to make it a beautiful, highly engaging story, and for this reason, I feel it is truly worthy of a Perfect 10 from Romance Reviews Today.

Passionate, emotional and entertaining, CLAIMED: THE PREGNANT HEIRESS is a tale not to be missed as you begin the New Year. Grab this one and put it at the top of your “to be read” pile. You won’t be sorry.

A new series too! I've not read her yet but do have a couple of hers. Love the SD line, and this does sound great! Great review!