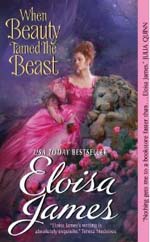 Linnet Berry Thrynne has ruined her reputation by consorting with the prince. It was only kisses, but the prince says he cannot marry a lowly viscount’s daughter, and the gossip is that Linnet is pregnant. Linnet is beautiful with a voluptuous figure; she is beyond comparison, but now she is considered unmarriageable. Because of her mother’s reputation, even her father and aunt don’t believe Linnet when she says she is a maiden. Her aunt suggests that Linnet be sent to Piers Yelverton as a marriage partner. It is rumored that he is impotent.

Piers Yelverton, Earl of Merchant, heir to the Duke of Windebank, is living in Wales. He is in pain from his injured leg, is grumpy and rude; sometimes he is called “the beast”. Piers is a brilliant doctor although a bit direct, and tells his patients the truth about their condition, refusing to use medications when he knows they will not be successful. He has no bedside manners. He has a butler named Prufrock who gives as good as he takes. Piers’s father is anxious for him to marry and produce an heir, much to Piers’s repugnance. Hoping to discourage his father, he writes and tells him the impossibly sterling qualifications he must have in a bride, even telling him he is impotent. This only spurs the duke on.

After much discussion, Linnet’s father and her aunt decide that Linnet must marry the Earl. They are sure that the Duke of Windebank will accept her as a daughter-in-law since she will have a child with royal blood, especially since his son cannot produce his own heir. Linnet ruminates about their plan and decides on her own scheme. After all, she doesn’t really care for men or kissing. She will pretend to be pregnant until she is married. A perfect solution!

WHEN BEAUTY TAMED THE BEAST is an entertaining and funny story as the reader sees what is ahead for Linnet and Piers. Linnet is so beautiful that she is sure Piers will fall in love with her within two weeks, but he tells her they will not suit. One of my favorite scenes is when Piers takes her to his outside pool. When she jumps in, she is freezing in the cold water and jumps on Piers, clinging to him like a barnacle to keep herself warm. He is insufferably rude, but he keeps a hospital of patients in his home, and patients come from far and wide to see him.

Linnet and Piers deal surprisingly well with each other. His insults don’t faze her, and she gives insults back to him. The dialogue is terrific! And readers will be sure that Piers has a kind heart under all of his bluster. You will love these two characters who get involved in some very heated scenes. Secondary characters, Piers’s parents, Prufrock, and the child Gavan, add to the tale.

Excellent dialogue, good pacing, and memorable characters make WHEN BEAUTY TAMED THE BEAST a Perfect 10. This reviewer will be looking for more stories by this talented author, and you will, too.