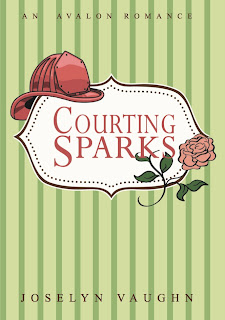 Welcome JOSELYN VAUGHN to the RRT Blog!
1. Tell us about your newest release.
My next release is Courting Sparks. It is about a young woman, Daphne, who has had a rough dating history and has decided it is time to try again. Unfortunately, in her mind, the only person she is attracted to is her male best friend and ex-boyfriend’s cousin, Noah. If that’s not bad enough, someone burns pictures from her prom at a local teen hangout and she could be blamed for the arson.
2. Can you tell us a little about your favorite scene in the story?
Courting Sparks was so much fun to write; it is hard to pick one scene. There’s the scene where Daphne is trying to give a presentation while Noah is dancing – he’s not good, but he’s cute. Or when Daphne has to bail her cousin Peggy out of jail after her bachelorette party. Or the ride in Peggy’s VW Beetle at the end. Peggy is quite the colorful person and has a tendency to steal the show.
3. When did you first realize you wanted to be a writer?
I’ve probably always wanted to be a writer. My necessities when going anywhere, especially as a kid were a book and a notebook. When my mom took me to the grocery store, I would stand and study the pens and notebooks while she got groceries.
I finally became serious about writing a couple years ago. My friend and I were bouncing around an idea at work, so when I came home for lunch, I started working on it. It eventually became CEOs Don’t Cry, my first book.
4. Where do you get your information or ideas for your stories?
From events and people around me. Things they say, stories they tell. They’ll say something and I think ‘oh the Minnie would say that’ so I jot it down. I work in bits and pieces here and there for a character, but they aren’t all from the same person.
5. What would you say is your interesting writing quirk?
My critique partner just rolls her eyes at this, but I write all my first drafts by hand. She always says why don’t you just type it, so you don’t have to do it later? I have small children, so my time using my laptop without them helping me is slim. They are less interested if I am using a pen and paper, although I occasionally get an extra hand or two on the pen. I can also take a notebook anywhere in the house or the backyard or the park and get a couple paragraphs down without having to wait for my laptop to boot.
Handwriting my first draft also helps me wander a bit and find the story. I usually have very little idea about what will happen in the book when I start chapter one. As I write I find the story and can check back with what I’ve already written. It is also easier for me to turn off the inner editor and I don’t lose my train of thought when I misspell things.
6. What was one of the most surprising things you learned in creating your books?
How a story can change and evolve. I recently wrote a story about a woman who was having car problems and thought it would be a simple story about her and the mechanic falling in love. Then all these issues developed. Why couldn’t she just sell the car and get something new? Why was he working at a tractor shop instead of being an auto mechanic? The story kept developing these layers that made the characters more complex and hopefully more interesting.
7. What authors or friends influenced you in helping you become a writer?
I think every author I’ve read has influenced me somehow, either because I loved the story so much I wanted to create a world as magical as theirs or because reading their story has given me confidence to try it myself. My critique partner, W. S. Gager (A Case of Infatuation and A Case of Accidental Intersection) is always pushing me to take the story to the next level.
8. What does your family think about your career as a published author?
So far everyone thinks it’s pretty cool. My brother and sister say I have inspired them to start writing as well. They are waiting for me to make millions. Haha! My husband wants to know when he can retire and when he needs to pose for a book cover. I tell him when I have a hero that looks like him. So far he’s out of luck.
9. Besides writing, what other interests do you have?
Reading, of course. I love searching for deals at thrift stores and garages sales. When I had more free time, I enjoyed sewing and quilting and hope to get back to that when my children are a little older. I also run and play golf, although I haven’t done the latter in a couple years because of the aforementioned children.
10. Can you tell us about what’s coming up next for you writing wise?
I am working on two more books in the Ladies Night Out/ Library Ladies Series. After that I hope to start something entirely new with a whole new set of characters.
******
Learn more by visiting the author's website at http://www.joselynvaughn.com/
You can purchasing Courting Sparks by clicking here.
Q and A

Joselyn Vaughn said…
Thanks for having me today. I wanted to let everyone know I'm posting my favorite holiday cookie recipes on my blog for December. Today is Fruit Oatmeal Cookie Bars. Fruit and oatmeal, practically healthy. Stop by and check them out (http://joselynvaughn.blogspot.com)
5:26 AM

WS Gager said…
Wow, that critique partner of yours must be a real nag! HAHA. Take it from one how has read both of Joselyn's books. They are fantastic romances. I've read maybe a couple of thousand romances in my life and Courting Sparks and CEOs Don't Cry have characters you will root for and laugh with especially when the library ladies get them in their sights. Buy them today!
9:17 AM