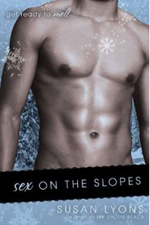 Three smoking hot tales revolving around a wedding taking place at Whistler during the winter will have readers reaching for a cold drink to cool down. Maybe one of the recipes provided in the book will help do the trick.

Wedding planner Andi Radcliffe wants Tom Davis and Shelley Williams' wedding to be perfect and she knows it has to be her top priority, but a fire at the Alpine chalet where the wedding party is staying immediately puts a crimp in her plans. Everyone is safe, but Andi has an encounter with a sexy firefighter who proves to be very distracting.

Jared Stone is a dedicated firefighter, and after losing his late wife, he's not looking to get involved with another woman. Andi makes it clear she's only here for a week as the chemistry between them sizzles, so why not indulge in a brief affair? However, the more they're together, the harder it proves to keep his feelings for her from exploding. Will their fling last after the wedding is over, or melt away like fire to ice?

The weather might be cold outside, but it's sultry hot inside for Andi and Jared in Fire and Ice. They hit it off immediately while meeting under the most unlikely of situations—a fire at the chalet that forces everyone to evacuate briefly. Andi and Jared are soon forgetting what brought them together and concentrating on each other. As a wedding planner, she needs everything to go smoothly, so of course, things don't. Meanwhile, Jared is still carrying sacred memories of his wife, and soon it becomes clear that there are three in bed with Jared and Andi. Can he exorcise his feelings and start a new beginning with Andi?

Brianna George has worked hard as the host of a hot television show to bring her career to the very pinnacle of its success. While she feels out of place as the wedding preparations go on around her (she's the groom's boss), she attempts to enjoy visiting Whistler. A day trip learning to ski brings Brianna into contact with sexy hot Aussie ski instructor Zack Michaels. The air between them sizzles enough to warm the cold air, but she holds back because she's not into sex with men she barely knows, besides, Zack is much younger than she.

Zack likes what he sees in Brianna. Even with all the “do me” ski bunnies around him, he's more interested in the tightlipped Brianna. It takes some heavy duty persuasion on his part, but soon he has her right where he wants her—in his bed. Brianna still wants to keep their relationship a secret, but the more he's with her, the more he wants to shout out how he feels about her.

An older woman-younger man relationship isn't what Brianna had planned for the trip to Whistler in Slippery Slope. After being burned by men in the past, she's generally distrustful, but Zack has her slowly breaking down her walls. Will something happen to test their friendship and love affair? Will it all end when the wedding vows are said and done by Tom and Shelley? Uber hot sex highlights a fun middle tale in SEX ON THE SLOPES.

In Hot Pursuit of a Bad Boy

Always the bad boy while growing up as friends with Tom and Maddie Davis, nothing appears to have changed for Logan Carver as he joins the Davis family in celebrating the upcoming wedding of Tom and Shelley. Now an undercover cop with the Royal Mounted Police, he's working to infiltrate a suspected drug organization. Staying with the wedding party is just a cover. However, Logan can't forget how much he wanted Maddie all those years ago. Sweet, innocent Maddie has grown into a sexy, sinful woman who makes it clear she wants Logan…in her bed.

Maddie never forgot Logan and it's clear their chemistry still sizzles right off the charts. She convinces him that she only wants one night with him and that Tom and her parents won't find out. But one night soon turns into another… Will Maddie prove to be a delectable temptation Logan won't be able to give up?

Years ago, Logan and Maddie kissed and Tom, his best friend, had warned him away. Logan left town and has lived up to his bad boy image through the intervening years, though it's helped him in his career in law enforcement. The sparks still fly between Maddie and Logan during In Hot Pursuit of a Bad Boy, and she certainly shows she wants them to heat up the sheets. She promises Logan that she only wants a fling, but will one night—or even one week—be enough? She'll have to work hard to make her case. Meanwhile, the case Logan is working on doesn't need a distraction like Maddie. Will something happen to make Logan realize that while Maddie says she isn't looking for a future with him, they are destined to be together forever? The sex scenes are scorching hot, so be sure your cold drink is close at hand.

It's really hard to say which of the three tales in SEX ON THE SLOPES is my favorite. Fire and Ice, Slippery Slope and In Hot Pursuit of a Bad Boy are all sexy, scintillating reads which were hard to set down. Susan Lyons has once again proven that she knows how to entertain readers and write sexy hot stories. For this reason, I'm awarding SEX ON THE SLOPES one of RRT's coveted Perfect 10 awards. It's a book I highly recommended to anyone who likes sizzling contemporary tales that are filled with passion and riveting plots.


***
Want this? Then tell us what your favorite Winter sport is!
US and Canada residents only.
Winner announced Wed night.
A Perfect 10 Contests

Jolene and Family said…
I'm not one for cold and snow, but I love watching Ice Skating and snowboardin

Karielle Stephanie said…
I love snowboarding even though I always make a fool of myself :)

Jessica said…
Ice skating and ice hockey are both fun

Cecile Smutty Hussy said…
Well before I met a friend of mine in Canada, I never had a favorite winter time sport.... But now.. I like hockey. Hey, I gotta support my friend!! =)

Please include me in this one!!
alliwantandmorebooks @ gmail.com
6:26 PM

Pam P said…
These stories do sound good and I've liked other books by her a lot.

Sheree said…
About the only winter sport I would do is cross country skiing because it'll keep me warm. I love watching the Winter Olympics though.

Laurie G said…
Fantastic review of Sex On the Slopes! I definitely want to read it!

Lets see my favorite winter sport that I can participate in would be cross country skiing. I live in the country so I can open my door and head out. We received 13+ inches yesterday!!

aromagik said…
Tobogganing is kind of interesting, but I don't watch or do any winter sports. Great review, though!

Maureen said…
I like watching snowboarding but I don't want to be out in the cold doing it.
7:35 AM

♥ said…
My favorite sport to watch is hockey if that counts...lol

Momof1DD said…
I am not sure if you consider sweeping/shoveling the porch/driveway as a sport. But for some reason I enjoy it. LOL!

But winter sport would have to be watching ice skating. I have never personally went ice skating and almost afraid too.

The Scarf Princess said…
I love watching snowboarding. The tricks are amazing.