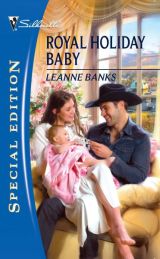 THE PRINCESS IS PREGNANT! IS THE DADDY A TEXAS TYCOON?
Valentina Deveraux was still in shock. She had always been the good girl, the model princess—not the one getting mixed up in tabloid scandals. But one carefree night burning the bedsheets with charming Texan Zachary Logan had changed everything. Now her main responsibility was not to the throne, but to her unborn child...and getting to know his or her father.

With Zach, Valentina felt she could put down her tiara and just be herself. But the rancher had a dark secret—one that threatened any chance of happily ever after. Could the American cowboy be her true Prince Charming? Or was she risking it all for a royal heartbreak?

Tell us a little about how YOU celebrated Christmas.

Winner announced Wednesday night. US and Canada mailing addresses only.
at December 26, 2010

I celebrated by being surrounded by all of my favorite people (My husband and children)
Thanks for the great giveaway :)

I celebrated Christmas with my family and boyfriend. It was a great Christmas. :)

I celebrated christmas with my son.
twoofakind12@yahoo.com

I celebrated by traveling to different houses for Christmas family gatherings.

We had all of hubby's family over on Christmas eve - very nice evening
msboatgal at aol.com

We celebrated Christmas by Geocaching in the late morning and then eating Chinese for lunch. Non-Traditional I know, but it was a great family activity. Thank you

I celebrated christmas with my daughter suelee1998 @ gmail.com

I celebrated a wonderful Christmas with my family.
chey127 at hotmail dot com

Had a wonderful family dinner!

I celebrated by seeing my family!

I celebrated Christmas with family at my parents home.

I spent the holidays shopping and travelling. woohoo!

Please enter me. I spent Christmas with the parents

I spent mine in Louisiana with the inlaws. Just got back home today and it is good to be home.

I just stayed home this christmas it was very relaxing!

I attended three holiday parties and saw so many great friends :)

I spent the whole holiday weekend alone because I was so sick with a stomach virus that going anywhere around my family and infecting them was out of the question. I didn't even get to eat a holiday meal, it was a bummer.

we had a big family gathering

We did Christmas on Christmas eve, so on the actual day I read. I read two books! What a wonderful way to spend a day!