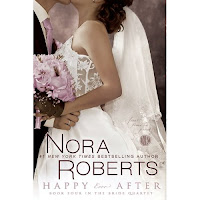 As children, best friends Parker Brown, Emma Grant, Laurel McBane, and Mackensie Elliot used to play the Wedding Game, and as adults they've turned their childhood game into a thriving business. Vows is the premier wedding planning company in the area, with Emma taking care of the floral end of the business, Laurel the pastry chef, Mac on photography, and Parker pulling it all together. Having watched her three best friends find the loves of their lives, Parker can't help but envy their happiness, but as event coordinator for Vows, she has too much going on to look for romance.

Then Malcolm Kavanaugh rescues her one night when she is almost in an accident. As he is a friend of Parker's brother Del , and the mechanic who works on both the company vehicles and their personal vehicles, Parker's met Malcolm before. Even—as a dare—kissed him on the Fourth of July. When he dares her to ride home on his motorcycle and ends the ride with a steamy kiss, Parker's intrigued. Mal's nothing like the men she normally dates, and he ignores all of her “back-off” vibes. Is it possible the man she hadn't even been looking for has been in front of her all along?

On the surface, Parker and Malcolm don't have a lot in common, but in HAPPY EVER AFTER, they learn that there is enough to build a relationship on. When Malcolm is first introduced to Parker (in book 2, BED OF ROSES), they strike sparks off one another, and as their friends pair off, Malcolm and Parker are the two singles in a group of couples. Parker likes order and logic and isn't going to be swayed by a sexy guy riding a hot motorcycle...no matter how much he intrigues her. Mal finds Parker attractive and wants to get to know her better, even knowing that a casual relationship with her isn't going to happen. Not only is Parker not the type for casual, Mal's friendship with her brother Del will be destroyed if he does anything to hurt her.

Amidst all of the weddings that Vows puts on, they also have a couple of extra-special ones in their near future, most importantly that of Mac and Carter (from VISION IN WHITE). Throughout the series, it has been fun to watch the special friendship that these four women share and the addition of men to their circle, but it's twice as good, watching as the date for Mac's wedding draws near. A story filled with love, both romantic and friendship-based, humor and memorable characters, HAPPY EVER AFTER is a story I highly recommend.

I am waiting on this book from the library...This has been a great series by Nora and I can't wait to read all the conflicts these two will face. I think this will be a great ending to this series..