HIS CONQUEST by Diana Cosby 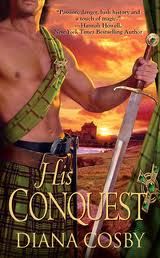 THE ONLY MAN WHO COULD SAVE HER

Linet Dancort will not be sold. But that's essentially what her brother intends to do—to trade her like so much chattel to widen his already vast scope of influence. Linet will seize any opportunity to escape her fate—and opportunity comes in the form of a rebel prisoner locked in her brother's dungeon, predatory and fearsome, and sentenced to hang in the morning.

WOULD FIRST NEED SAVING HIMSELF

Seathan MacGruder, Earl of Grey, is not unused to cheating death. But even this legendary Scottish warrior is surprised when a beautiful Englishwoman creeps to his cell and offers him his freedom. What Linet wants in exchange, though—safe passage to the Highlands—is a steep price to pay. For the only thing more dangerous than the journey through embattled Scotland is the desire that smolders between these two fugitives the first time they touch . . .

What is the must thing you have to do for Thanksgiving, either a particular food or other tradition your family does?

Post your responses and I'll pick a winner later in the week.

We usually have just about the same thing every year. My son's favorite is the stuffing, so I always make lots of it.
twoofakind12@yahoo.com

I can't imagine Thanksgiving without turkey and stuffing with gravy.

The one thing we have to do is cook a big Thanksgiving Day meal. Turkey, stuffing, biscuits, multiple types of pies, cranberry sauce, sweet potato casserole, etc. are always on the menu for Thanksgiving.

We play poker after our big meal!

We always have turkey, cranberry sauce, mashed potatoes and gravy. The rest of the meal is not set in stone.
chey127 at hotmail dot com

We fix a lot of the same foods from year to year--turkey, gravy, cranberry sauce, etc. The absolute must have is the dirty-rice dressing. Mmmmmmmm....Happy Thanksgiving.

I have to make pumpkin rolls

We always have the whole family together for a big turkey dinner.

Great blurb for this book. It really has me hooked!

One thing I always do for Thanksgiving is buy a honey-baked ham to go with the turkey my mother-in-law fixes. Then we drive about 2 hours and gather with about 20 relatives for dinner.

If I don't bring a salad or some vegetable dish, there won't be any veggies at the Thanksgiving dinner. Now, most of the family probably won't care, but I do.

My mom and I always cook together :-)

The family always has dinner together.

I have two Thanksgivings, one with each of my parent's families. We also always watch the football games on Thanksgiving.

My friends and I always have a cookoff. We invite our parents, brothers, sisters, boyfriends, girlfriends, husbands, wives, EVERYONE comes and it's just a big, fun bash.

our tradition is always gathering together to have a nice Thanksgiving dinner.

Must have turkey!! And if at all possible, I have to be home or with my or hubby's family. I hate being away from home on the holidays. annhonATaolDOTcom

I so love the Zebra historical romances!! This author I have not read yet and excited about this one!

I'm so going to miss not having my daughter here for Christmas with her being with fiance. We trying to figure this dinner out, LOL. So it will be hubby and son (I do so bad with turkey). We love to make a new stuffing tho, so we make the regular stuffing but too try a new one as well!

I would love to read this book. We always cook and hang out together when we get together during the thanksgiving holiday.

I always go to my sisters early so that I can help her get everything ready for the family. We always have turkey and dressing, gravy, green beans and deviled eggs. We have more but it can change from year to year.

My sisters broccoli casserole, everybody loves it. Of course the traditional pumpkin pie too.

Must have as many pies as possible for dessert, lol, big family. Other is stuffing, most like simple bread stuffing but some of us like my brother's sausage stuffing. Now that he's gone, someone is always sure to make that too now, thinking of him. Happy Thanksgiving!

Green Bean Casserole...only time of the year I eat it!

Brandy B aka Brandlwyne said...

Homemade Chicken and noodles and of course Pumpkin Pie!!!

Always we have butternut squash!

We must get the family together--it doesn't HAVE to be on Thanksgiving at dinner, but we do have a turkey meal sometime during this weekend!