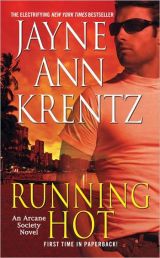 Blurb:
Ex-cop Luther Malone, lifelong member of the secretive paranormal organization known as the Arcane Society, is waiting to meet Grace Renquist. Hired as an aura-reading consultant in the quest for a murder suspect, she's got zero field experience. She's from tiny Eclipse Bay, Oregon. She's a librarian, for heaven's sake.
As for Grace, she's not expecting much either from Malone, who walks with a cane and isn't so good with a gun. Nice résumé for a bodyguard . . .

But even before they reach their hotel in Maui—where they'll be posing as honeymooners—Grace and Luther feel the electric charge between them. Problem is, they need to remain vigilant day and night, because it soon becomes clear there's more going on here. Rogue sensitives—operatives for the underground group Nightshade—are pouring into the luxury resort like there's a convention. Grace recognizes those dark spikes in their auras. She saw the same pattern in someone else in another life—a life she hasn't revealed to Luther or anyone else. And she understands how dangerous these people can be . . . especially with those para-hunters at their sides.

While the pair's employers at Jones & Jones scramble to get them backup, Luther and Grace have to think on their feet. The criminals in their midst aren't just high-level sensitives: They've enhanced their talents with a potent—and unpredictable— drug. And as Grace knows all too well, if you don't control your powers, your powers will control you. . . .

Want this? Easy question (lol) for you to enter the contest to win it.

What do you really really want for Christmas?

Post your response (one per person) and I'll announce a winner of this book on Wednesday night!
at November 07, 2010

I'd like to have a new vacuum cleaner for Christmas. Mine isn't working very well and it definitely needs to be replaced.

a KINDLE. I really need one, or a new really big bookshelf! My three bookshelfs are full, I was tempted to take the extra pics of my kids and picture books off for extra space for my books, but then thought, na, I really can't pictures of the kids down. I have a big box at the foot of our bed filled with my overflow. My husband and I both trip on it every morning. So, what I really need and want is a kindle and a bookshelf for my overflow books :)
june111@att.net

I really want a Kindle for Christmas I've been wanting one for a while now.

I would like to get an iPad for Christmas. annhonATaolDOTcom

A trip for two to Hawaii.

A kindle or an ipad. I know both are just dreams but thats what I would get if I could get anything.

I want new bookshelves. The floor to ceiling type...oh yeah! :)

I want a Kitchen Aid mixer.

This sounds good.
I want an IPad for Christmas
elaing8(at)netscape(dot)net

I just want everyone to be happy!

I want a new phone for Christmas :)

I want a MacBook Air.

I want my family to actually get along this year! LOL

I would love a new puppy :D

I would like my children to all come home for a family get together!

Other wants:
a new computer!!
books
a Kitchen Aide mixer would also be nice!

World Peace....I'm sorry, I couldn't resist. I want another Swarovski Crystal miniature from my Swarovski wishlist...don't care which one, but I hope it will be the limited edition woodpecker!

anything to add to my newly renovated kitchen...it's beautiful!