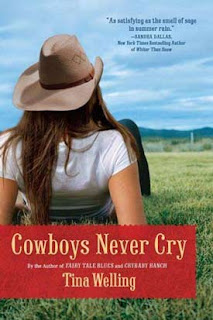 Some of the most fun I’ve had was writing COWBOYS NEVER CRY. I loved the three main characters and the funny scenes and humorous lines that came to me from their voices. The story is about Cassie Danner, who is three years into grieving over the loss of her mountain climbing husband, struggling to get out of the debt he’d left her in, and in love with the Grand Teton Mountains. This leads her to take on the job as summer cook on the Cross Wave Guest Ranch in Jackson Hole. Robbin McKeag became a child actor inadvertently and his career grew through his adulthood into overwhelming fame and self-destruction. The novel opens with Robbin returning home to the Cross Wave where he grew up for time out to heal. His father, Boone, owns the Cross Wave Ranch where these two wounded people encounter each other, antagonize each other and eventually fall in love. The novel explores fame, grief and how ranching conflicts with land conservation.

One scene can still make me smile when I read it. It depicts the moment in which the connection between Cassie and Robbin begins to turn from antagonism to overt attraction, yet the dialogue exchange between them still rides that edge between the two. Boone, Cassie’s boss and Robbin’s father, secretly hopes for a romance to blossom and alternately plays the role of buffer and matchmaker between the two.
In the scene Robbin has been gone from the ranch for a few days and just returns to discover that Cassie stayed out late the night before and is dressed up to go out again. Robbin tries to get Boone to disclose just how late Cassie came in the night before, but Boone replies that Cassie’s private life is her own business. Cassie smugly nods at that. But Robbin doesn’t give up and eases out of Boone how many late night movies he watched before he went to bed, knowing he’d stay up until Cassie was home safely. Boone gets involved in telling the plots of the three old movies he watched, the last one being a western in which the hero “rides off into the sunset before she pulls in.” Robbin says to Cassie, “Hah, 3:00am. From now on you get home before Gary Cooper does.”


There was a stretch of many years, starting when my two sons were babies until they grew up, in which I knew I wanted to write. During that time I intermittently put action to my dream, yet always allowed other loves to come first. Then one day when my sons were in high school and my business, a resort shop, felt established, I made the decision to put my writing on the top of my list and stick with it until I had finished a novel. Now my sons are grown, I’ve let go of my shop, and the last five years I have been writing full time. I love it.


My novels always begin with an emotion between two people and an idea that I’d like to explore. In COWBOYS NEVER CRY the two main characters exemplified two opposite poles of experience: grief, which is seen by our culture as the depths of misery, and fame, which our culture suggests is a peak of happiness. I wanted to show how these two experiences are actually similar in that personal growth often comes to a halt. I wanted to write a love story that was based on an exchange of healing. And I wanted to write it with lots of humor.

From talking to my writer friends, I gather that it may be quirky of me to write in my pajamas. Before getting showered and dressed in the mornings, I’ll begin writing. I only intend to write until I finish my cup of coffee, but usually it takes my husband coming home for lunch to remind me to break away. I think this works for me, because I find that it’s hard to take anything too seriously while wearing pajamas.


I discovered that if I think I don’t know something, all I need to do is to begin writing about it anyway. Information, emotional awareness and past experience just rise to my consciousness as a result of trusting myself and using the physical act of writing to spur my memory and imagination. Which is exactly how I answered this question when my first response was a blank mind.

To begin with it was as simple as my mother loving the letters I wrote to her. That made me think I could write for others. Later the novelist Tim Sandlin became a good friend. He was published years before I was, but never stopped supporting me while I went for decades being unpublished. He is the director of the Jackson Hole Writers Conference, and early on he assigned me workshops to teach and public talks to give. He allowed me to live, work and see myself as a writer when no one else did.

My husband is wonderful in his support and enthusiasm for my work. My sister and brother and their partners are fabulous. They go into bookstores where they live and set my books face out on the shelves and take photos of COWBOYS NEVER CRY sitting on special tables. My two sons, now grown with families of their own, aren’t too interested. I thought that was odd until I read that other authors have the same experience with their children. Now I get it. What son wants to read love scenes written by their mother?


I love the outdoors, which helps me to write about settings. I hike and ski – it’s almost a law if you live in Jackson Hole. I read a lot, of course. And I adore knitting…or at least buying yarn, which I have more of than actual knitted items!

Right now I am in the dreaming stage of a new novel, jotting down lines and ideas when they occur to me. There are certain qualities of male-female relationships that I’m interested in and there are certain issues of being a woman in our culture that especially arouse my attention. So I like to incorporate these areas that hold energy for me into my writing projects. And always I love to write about the natural world and how it delights our senses.


*****
Learn more about Tina by visiting her website at http://www.tinawelling.com/
Q and A