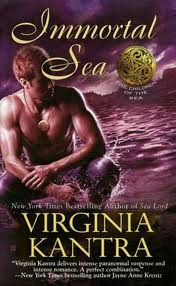 Copenhagen, Denmark, Sixteen Years Ago, and the Present in World’s End, Maine

Elizabeth Ramsey comes to Copenhagen on vacation before she begins med school. One evening while walking down the street, she is accosted by three men. Another man appears out of the darkness and rescues her. He is tall, with white-blond hair, and wears a long leather coat. When he walks her to the main street, she inadvertently touches him, and he misconstrues the touch. To his kind, a merfolk warden of the Northern Deeps, a touch means either fighting or making love. He takes her to an isolated spot and makes delicious love to her, then walks her to her hotel without another word.

Now, sixteen years later, Elizabeth is living on the island of World’s End as the one and only doctor for the residents. Zack, fifteen years old, and Emily, seven years old, accompany her. Zack is having problems getting through his grief at the death of his father, and Elizabeth hopes, with less work, to spend more time with her children.

Morgan arrives on the island following his prince, Lord Conn. Morgan worries about his people who are dying, but Lord Conn believes they can strengthen the merfolk by cohabiting with humans. As Morgan watches, a boy is being taunted by two other boys, and they get into a fight. The one boy is stronger than Morgan thought possible, and when he goes up to him and looks into his eyes, he is surprised to recognize him as finfolk. And when Elizabeth drives up looking for her son, Morgan recognizes her...could Zack be his son? He meets with Elizabeth and is still attracted to her, and she to him, but she pretends to be indifferent. What will she do if Morgan wants a relationship with their son? She has no idea who or what he is, but she does know that her temperature escalates when she is near him.

IMMORTAL SEA is a fascinating story. Although it can stand on its own, I am sorry that I haven’t read the novels leading up to this one. There is a prequel to the series in each of the following two anthologies, SHIFTER (March 2008) and BURNING UP (August 2010). Book one of The Children of the Sea series is SEA WITCH, July 2008; book two is SEA FEVER, August 2008, and book three is SEA LORD, May 2009. In IMMORTAL SEA, many characters from the previous books appear, merfolk happily married to humans and who appear perfectly human as long as they stay on land, but are shape-shifters in the sea.

Morgan and Elizabeth are likeable characters, although Morgan has to learn a few human traits, like empathy and compassion, but even so, there is something about him that will make readers' hearts beat a little faster! Elizabeth is a strong woman; she is determined to protect her child, and she isn’t sure that she can trust Morgan. He admires her strength, and her strength makes him want her even more. He also wants his son, particularly if he really is finfolk. He wants to protect him and teach him his nature. As things heat up between Morgan and Elizabeth, for the first time, he begins to feel real affection toward Elizabeth and her family. You can expect some very hot romantic scenes in IMMORTAL SEA. I really enjoyed this book—a lot. It was a bit different from the usual paranormals, and I plan to read more about Ms. Kantra’s mesmerizing merfolk. Coming soon: FORGOTTEN SEA.